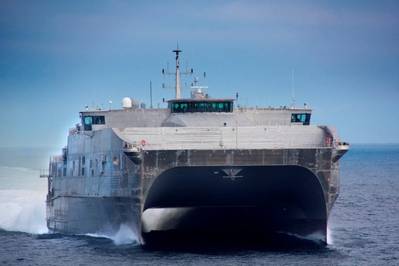 Austal USA said it was awarded a $326 million contract to built the 11th and 12th Expeditionary Fast Transport ships (EPF) for the U.S. Navy.

This new contract adds upon a 2008 fully-funded EPF 10-ship block-buy agreement and brings Austal’s current build to a 12 ship program valued at $1.9 billion, and thereby extending the shipbuilder’s production under contract into 2022.
Austal USA’s EPF program has seen seven ships delivered so far, with three more under construction at its headquarters and ship manufacturing facility in Mobile, Ala.
The EPF’s large, open-mission deck and large habitability spaces provide the opportunity to conduct a wide range of missions from engagement and humanitarian assistance to disaster relief, and from maritime security support operations, to intelligence, surveillance and reconnaissance.
With a draft of 13 feet and a unique propulsion system, its ability to access austere and degraded ports with minimal external assistance provides an overabundance of options to fleet and combatant commanders. Along with its draft, propulsion system, enormous mission bay and greater-than 40 knot speed, these ships have the potential to support future requirements in special operations, command and control, and medical support operations.
“These ships were designed to be a force multiplier and to bring a unique capability to the fleet  ̶  they’re doing just that. The possible uses of the EPF are endless,” said Austal USA President Craig Perciavalle.

Pascagoula, Miss. shipbuilder Halter Marine announced on Thursday it has been awarded a $149 million contract for the detail…