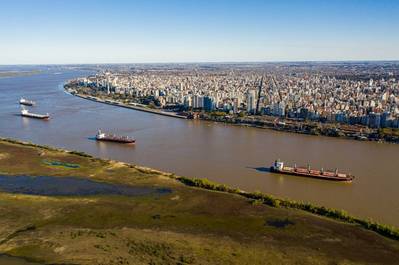 Aerial shot over Parana River in Front of Rosario City / Image for Illustration only - Credit: Wirestock

The government of Argentina on Monday declared a 180-day “water emergency” for the Parana River, which is suffering a historic bout of shallowness that has affected the amount of grains that can be shipped from the country’s key ports hub of Rosario.

The country is a major international food supplier. The Parana, which originates in a drought-hit part of Brazil, carries about 80% of Argentina’s agricultural shipments, which are the country’s main source of export dollars.

The river is at its lowest level in 77 years. The state of emergency, which will take effect on Tuesday, was published in the government’s gazette and covers wide parts of the Parana River basin, affecting the provinces of Formosa, Chaco, Corrientes, Santa Fe, Entre Ríos, Misiones and Buenos Aires.

Residents and businesses in these areas are urged to reduce the amount of water they use.

“The extraordinary magnitude of the emergency requires that all areas of the national government join forces to mitigate this hydrological phenomenon in the areas affected,” the government decree said.

Ships departing from Rosario are having to leave grains ports with 25% less cargo than usual due to river shallowness, which is not expected to improve for months.

The emergency is hitting at the peak of soy and corn export season. Argentina is the world’s No. 3 corn exporter and top supplier of soymeal livestock feed, used to fatten hogs and poultry from Europe to Southeast Asia.