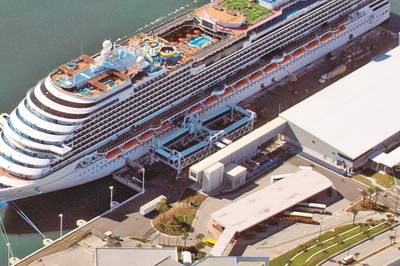 ADELTE, a provider of Seaport Passenger Boarding Bridges (SPBBs) and Global Services to cruise and ferry terminals, has been awarded two contracts by the Canaveral Port Authority to design, manufacture and install four custom-made HYDRA models SPBBs at Cruise Terminals 5 and 10.

Port Canaveral was named the “Best North American Homeport” in 2015 by Cruise Critic and is the world’s second-largest cruise port by number of passengers, receiving 3.9 million passengers in 2015, behind Miami’s 4.8 million passengers. It is expected to grow by 50 percent in the next four years, reaching up to 6 million cruise guests annually.
In order to provide first-class infrastructure and follow-up with the opening of Cruise Terminal 6 in 2012 and Cruise Terminal 1 in 2014, complete renovations of Cruise Terminal 5 and Cruise Terminal 10 were engaged and are currently underway. The three major improvements of this $90 million dollar plan are: state-of-the-art passenger boarding systems, renovation of the passenger areas and a new parking garage.
ADELTE will deliver four tailor-made HYDRA Boarding Bridges designed to perfectly accommodate large modern cruise ships such as the Carnival Magic, Norvegian Epic and Royal Caribbean International’s Oasis of the Seas which will homeport in Port Canaveral in 2016.
CT5 and CT10 will both operate a pair of symmetrical SPBBs that will include all the latest innovations and cutting-edge technology patented by ADELTE, ensuring optimum operating efficiency and total safety and comfort for passengers, including those with reduced mobility. These systems will also allow continuous truck, equipment and supplies traffic on the quayside while passengers can embark and disembark in total safety.
Moreover, the HYDRAs will be equipped with an innovative new feature developed by ADELTE’s R&D engineering department. It consists of a cabin with a double telescopic ramp, which adapts perfectly to each access door position and configuration and allows a greater flow of passengers. This feature should be greatly appreciated by the +6,300 guests of the Oasis homeporting in the harbour.
ADELTE will have a total of six Passenger Boarding Bridges operating in Port Canaveral in 2016.