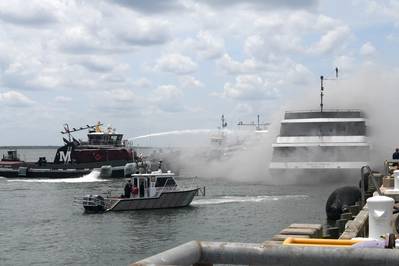 More than 100 passengers, the vast majority of them school children, were rescued from a passenger vessel that caught fire on Tuesday in Norfolk, Va.

The fire aboard the Spirit of Norfolk was reported around noon, while the vessel was on a cruise in the Elizabeth River, near Naval Station Norfolk. Images and videos shared on social media show flames and heavy smoke rising from the 169-foot-long vessel. The cause of the fire is under investigation, though officials believe it started in the vessel's engine room.

The three-level yacht style vessel, operated by the Hornblower Group's City Experiences and typically used for private events and dinner cruises, was reportedly hosting preschoolers from Virginia Beach and fifth-graders from Newport News at the time of the incident.

All passengers, including 89 children, were safely transferred to another passenger vessel, Victory Rover, and brought back to Town Point Park. No injuries have been reported.

A number of commercial tugs and crews from the U.S. Navy, U.S. Coast Guard and several local fire departments also responded to help battle the blaze.

Two Spirit of Norfolk crewmembers remained on board as the fire-stricken vessel was towed to Naval Station Norfolk's Pier 4 where the crew disembarked and firefighting efforts continued.

Images shared during the night show the vessel sitting low in the water and flames running the length of the vessel and through its decks.

Officials said Wednesday morning that the fire has started to burn it self out but is still active.