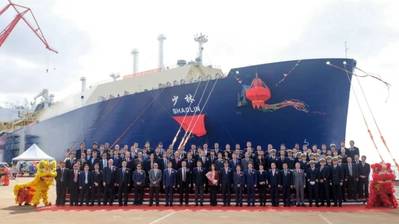 The vessel Shaolin, named after the renowned Chinese kungfu style, is designed to carry 174,000 cubic meters of the super-chilled fuel, PetroChina International said on its WeChat platform on Wednesday.

The carrier is one of three vessels ordered in 2020 costing a total of $600 million by a joint venture between PetroChina International, Shanghai LNG and Cosco Shipping Energy Transport Co. Ltd.

Shanghai-based Hudong-Zhonghua, a unit of China State Shipbuilding Corporation (CSSC), is one of the country's few shipyards capable of building large LNG carriers.

"Under the complex global environment, owning your own shipping capacity has become increasingly important," Wu Junli, President of PetroChina International was cited as saying at vessel's delivery ceremony.