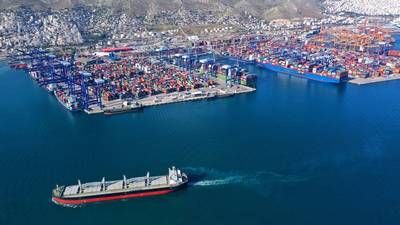 Piraeus Bank, one of Greece’s four largest lenders, said on Tuesday it had reached a deal to sell a portfolio of non-performing shipping loans to an entity affiliated with Davidson Kempner Capital Management.

The agreed price will be about 53% of the portfolio’s gross book value of 400 million euros ($452 million), the bank said.

The sale of the portfolio, dubbed project Dory, is subject to approval by the Hellenic Financial Stability Fund, a shareholder in Piraeus Bank, the lender said.

The transaction will reduce Piraeus Bank’s ratio of non-performing exposures to about 15% from 16% at the end of September 2021 and increase its NPE coverage ratio to about 40% from 39%.

The sale’s expected capital impact will be around minus 20 basis points versus the bank’s end-September total capital ratio.