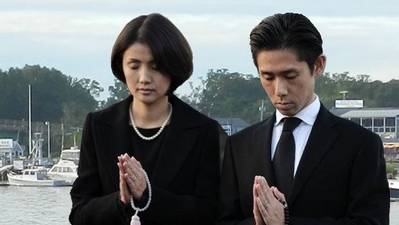 NEBAS founder, Captain Brad White reports that Japan has a new and genuine interest in New England, and it is not related to Blue Fin Tuna, but burials at sea.
Kenji McCulley, Associate Producer General Bureau for America of NHK, Japan’s national television network, Japan Broadcasting Corp., stated, “This burial at sea topic is of great interest to our audience as Japan is facing an increasing scarcity of land for cemeteries. People are looking for better ways to bury their loved ones.”
White said, “The NHK documentary team from NY and Tokyo showed an interest in our business model and was invited to attend a private family burial at sea event on June 29, 2015, organized by NEBAS in Newburyport, Mass. and they recorded a New England family performing the dual scattering of the cremated remains of their father and sister three miles to sea, east of Plum Island, Mass. –a place where they loved to summer and their final wish was to be scattered there.  The family contacted NEBAS and easily arranged the beautiful scattering ceremony attended by family and friends and followed by a catered luncheon.”
Kenji also added, “I read about NEBAS and was hoping to include it in our report. As Japan is an island country, I believe our audience would be interested in hearing about this method. I was hoping to learn more about the origins of the company, how the idea came about and how the company hopes to grow in coming years as more urbanization in the U.S. squeezes out cemetery grounds.”
Capt. Brad White said, “I was pleased to meet the N.Y. team in Boston and invite them aboard to see firsthand the quality and caring that goes into each and every event. Especially since NHK is Japan’s national television network, carried in over 30 million households across the country. The English language network NHK World, is in over 150 countries, and the segments will air in all during July 2015.
White added, “Our short term goal is to promptly service U.S. based Japanese families on the east and west coast with affiliate Ashes On The Sea in a customized way with over 84 vessels departing from 46 ports –typically within an hour’s drive of their home.”