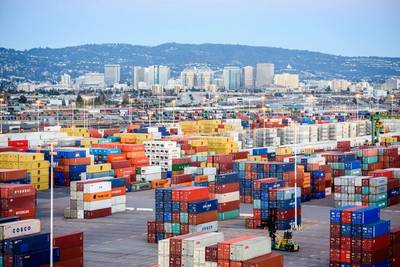 A freight distribution center placing high-demand logistics capability inside a global trade gateway will soon take shape here.  The Port of Oakland said today that work should begin this fall on a long-awaited Seaport Logistics Complex.

The complex is envisioned as a cargo-handling campus that could change the trajectory of Port business.  Currently a West Coast terminus for Transpacific trade vessels, Oakland could eventually double as a major freight distribution point.

“This is our future,” said Port of Oakland Maritime Director John Driscoll.  “The Seaport Logistics Complex will give freight shippers the opportunity to manage international supply chains right next door to the rail yards and marine terminals where their cargo is transported.”

CenterPoint Properties, a premier industrial real estate company, is building CenterPoint Landing, the first 440,000-square-foot facility at the complex.  Oak Brook, IL-based CenterPoint said site preparation on its 27-acre leased parcel should begin by October.  The tentative schedule calls for construction to begin next spring.  The building is expected to open by summer 2020.

CenterPoint’s $52 million facility will be constructed at Maritime and 14th streets in the heart of the Port.  The property once served as an Army supply depot.

The Army decommissioned its Oakland base in the late 1990s.  The Port received about 240 acres of the property between 2003 and 2007.  Since then, planners have imagined a logistics campus that could further strengthen Oakland’s role as a global trade gateway. The plan eventually calls for a complex with multiple buildings for warehousing or distribution.

The Seaport Logistics Complex is envisioned as a transload center where shippers can ready cargo for transfer from ships to trucks or rail. Transloading has become increasingly popular with supply chain managers pursuing cost-effective transport alternatives.  CenterPoint officials said no other U.S. port has the land to duplicate Oakland’s marriage of transportation and logistics capabilities.

The Port opened a $100 million rail yard at the Seaport Logistics Complex in 2016.  CenterPoint’s development will be the first building at the campus.