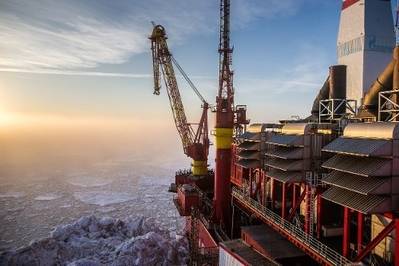 Gazprom lists amongst its 2013 achievements: the first subsea gas production facility by any Russian company, and secondly, extraction of the first oil from the Russian Arctic Shelf.

The Kirinskoye field and other fields within the Sakhalin III project are the resource base for promoting the gasification process in the Russian Far Eastern regions and building a liquefied natural gas plant in the Primorye Territory – the Vladivostok-LNG project.

Russian Arctic Shelf Development
Earlier this year, Gazprom started producing oil from the Prirazlomnoye field. It is the first Russian project for developing the Arctic shelf and marks the commencement of the company's large-scale activities aimed at creating a large hydrocarbon producing center in the region.

Gazprom explains that Prirazlomnaya offshore ice-resistant stationary platform secures every process operation in the field. It is the first time in the world that hydrocarbons in the Arctic shelf have been produced by a stationary platform. Prirazlomnaya is intended for operation under extreme environmental and climatic conditions, being claimed able to meet the most stringent safety requirements and able to resist high ice loads. Gazprom adds that the design features of Prirazlomnaya fully exclude any oil spills during its production and storage.