Profitability Still a Way Off for Tanker Shipping -BIMCO 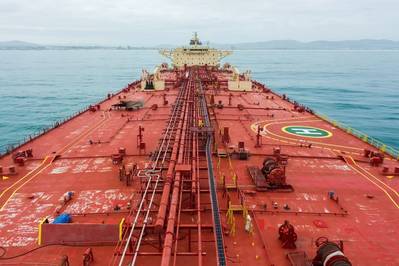 New virus mutations and outbreaks have slowed the recovery in global oil demand as some countries lock down again and international travel remains complicated.

Drivers of demand and freight rates
To say that the summer has not been kind to the crude oil shipping industry would be an understatement. Average earnings have dropped below $10,000 per day since June for all crude oil tankers, with many trades offering negative earnings; freight rates are not high enough to cover voyage expenses, let alone operating and financing costs. Daily average very large crude carrier (VLCC) earnings on September 3 stood at $8,138. According to BIMCO estimates, a standard VLCC must earn around $25,000 per day to break even. The last time average VLCC earnings were above this level was at the end of December 2020. Earnings for Suezmax and Aframax tankers stood at $9,194 and $8,367 per day, respectively, on September 3. 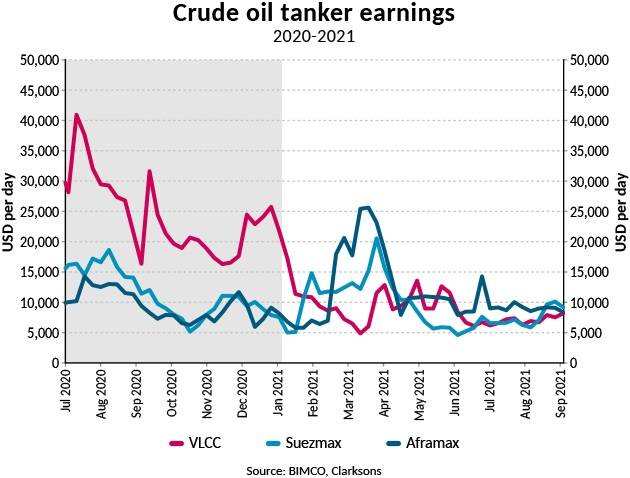 A clear indication of the currently low activity in the VLCC market is the lack of volatility in earnings. The difference between the highest and lowest average earnings in August was just $1,183.

In terms of demand for seaborne transportation of oil products, volumes have risen by 22.4% in the first six months of this year compared to 2020, but at 508.2m tonnes, volumes are, however, 13.4% lower than in the first half of 2019. Out of the major oil products, the largest increase in volumes compared with last year and smallest decrease compared to 2019 has been registered for gasoline, which is down 6.4% after the first six months of 2021 compared with pre-pandemic levels. In the same period, gasoline volumes have risen 35.9% compared with the first half of 2020 (source: Tradeviews). 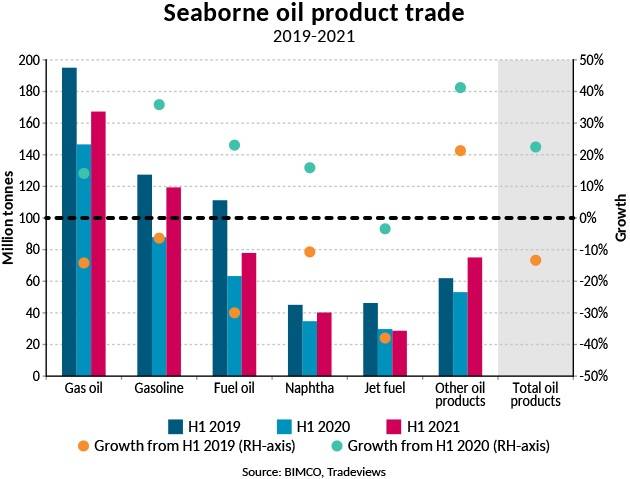 Considering the sluggish recovery in international flight activity, it probably comes as no surprise that jet fuel has fallen the most compared with its pre-pandemic levels. In fact, demand for jet fuel has continued to fall this year compared to last. Volumes are down by 3.4% compared to the first half of 2020, and by 38.0% from the same period in 2019. In the first half of this year jet fuel accounted for 5.6% of total oil product volumes carried by sea, down from 7.9% in H1 2019, when they accounted for a larger share of activity.

In the U.S., the driving season is coming to an end and the supply of gasoline, a good proxy for demand, has returned to its 2015-2019 range over the summer. In the week ending 27 August, the supply of gasoline amounted to 9.6m barrels per day (bpd), down slightly from early July, when supply peaked at 10.0 million bpd. Compared to 2019, the average amount of gasoline supplied per day between June and August is down 2.8%, despite a 9.2% increase from the summer of 2020.

A recovery in U.S. domestic flight travel has also led to a recovery in jet fuel demand. However, with an average of 1.9m passengers a day, a recovery in international travel is needed to bring numbers back up to the 2.5 million passengers per day recorded in the summer of 2019. In the week ending August 27, the supply of jet fuel jumped up to 1.8 million bpd, its highest level since January 2020.

In contrast to the year-on-year growth in demand for oil products in the U.S. and much of the world, worldwide crude oil imports have fallen. Globally, exports of crude oil have totaled 849.8 million tonnes, down 63.2 million tonnes from H1 2020 and 121.7 million tonnes lower than H1 2019 (source: Tradeviews), explaining the significant drops in freight rates. 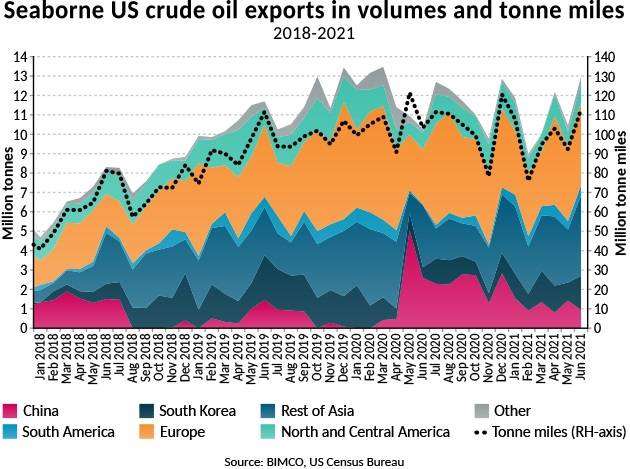 In the Far East, the three largest importers of crude oil (China, South Korea and Japan) have seen volumes fall 6.2% in the first seven months of the year compared with the same period in 2020, exceeding the drop compared with pre-pandemic H1 in 2019. Compared with this period, the drop amounted to 2.7%, which was attributable to the high volumes of crude oil that were imported during the oil price war. Combined, the three countries have imported 442.8m tonnes of crude oil so far this year, which is equivalent to 2,214 VLCC loads (200,000 tonnes).

Fleet news
Despite the fact that more ships entering the fleet is hardly what the market currently needs, as the existing fleet already struggles to cover its costs and run with profit, the tanker fleet will inevitably grow this year. BIMCO expects the crude oil tanker fleet to grow by 2.7% this year, with a net addition of 12.8 million DWT, and the oil product tanker fleet to grow by 3 million DWT or 1.7%. This would be the lowest fleet growth recorded for product tankers since the early 2000s. BIMCO expects the growth rate to fall even further to 1.2% in 2022, as deliveries are expected to fall to about half of this year’s level. In a year of declining demand, keeping fleet growth as low as possible is essential.

The lower fleet growth for oil product tankers has not come from a fall in deliveries, which are in fact up this year at 7 million DWT compared with 4.9 million in 2020, but rather from a rise in demolition activity. BIMCO expects a record 4 million DWT to be demolished this year, exceeding the previous record of 3.8 million DWT from 2010. So far this year, 2.5 million DWT have been demolished.

Product tanker demolitions include 612,760 DWT of LR2 tankers (six units) with an average age of around 20 years. Most of the demolished ships are MR/Handy size tankers, of which 37 have been demolished, totaling 1.6 million DWT. 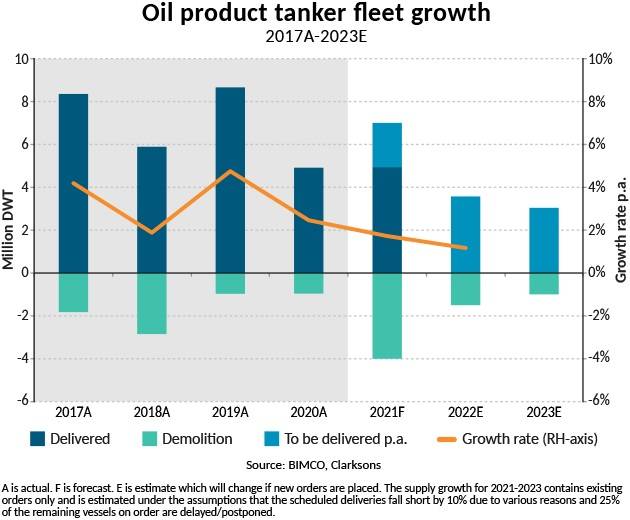 On the ordering front, new contracts for oil product tankers have totaled 4.1 million DWT this year with a further 14.5 million DWT of crude oil tankers being ordered.

Outlook
As tanker owners hold on to their ships, hoping for better times ahead and not nearing bankruptcy as last year’s significant earnings cushion their bottom lines, the pandemic keeps extending the timeline for recovery. New virus variants and outbreaks in regions of the world with low vaccination rates continue to delay a recovery in the demand for oil. This is especially problematic as real volume growth in demand for tanker shipping over the past decade has primarily been driven by the countries that currently have low vaccination rates and which are now facing new outbreaks as a result.

At the latest OPEC+ meeting, held on September 1, partners agreed to continue the current trajectory of adding 400,000 bpd every month. Ahead of this meeting, the alliance released its latest estimates, forecasting that oil demand will grow by 5.95 million bpd this year compared to last, still 3 million bpd short of 2019 levels. Looking forward, OPEC has adjusted its forecast for growth in 2022 to an increase of 4.2 million bpd (900,000 bpd from July forecast).

Just as global demand for oil is currently below its pre-pandemic levels, demand for shipping is on the decline because the stocks that were built up over the summer last year are now being used. In fact, U.S. crude oil stocks are currently at their lowest level since January 2015, at 1,053 million barrels, down from their peak in June 2020, when they reached 1,195 million barrels. Lower stocks and rising demand indicate that either the U.S. will have to start producing more crude oil or look to increase imports, a scenario that would be beneficial for the shipping industry. The U.S. has been a leading voice in calls for OPEC to increase production as crude oil prices have risen.

As the northern winter approaches, which is traditionally tanker shipping’s strong season, demand will remain subdued, with little hope of tankers achieving profitable freight rates on open trades this year, unless seasonal issues can stimulate underlying demand to boost earnings. As demand is forecast to exceed 2019 levels in 2022, the outlook for tanker shipping is better next year. That said, better and good are not always the same thing and profitable rates may not be a reality until the second half of 2022.