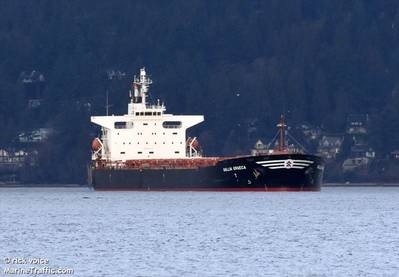 The companies that own and operate a Greek shipping vessel and two engineers from the ship were convicted today in U.S. District Court in Seattle of 12 felony counts related to their dumping of oily waste at sea, announced U.S. Attorney Annette L. Hayes.

The ship operator, Angelakos Hellas S.A., the ship owner, Gallia Graeca Shipping LTD, the chief engineer, Konstantinos Chrysovergis and the second engineer, Tryfon Angelou were found guilty of violating the Act to Prevent Pollution from Ships, the falsification of records in a federal investigation and engaging in a scheme to defraud the United States. The jury deliberated for three days following an eight-day jury trial. U.S. District Judge John C. Coughenour scheduled sentencing for September 16, 2016.

According to records filed in the case and testimony at trial, the cargo ship Gallia Graeca traveled from China to Seattle in October 2015. During the voyage, a pollution-control device known as an oil water separator was inoperable. On October 16, 26 and 27, 2015, the defendants bypassed safeguards that prevent the discharge of oily water and discharged approximately 5,000 gallons of oily bilge water overboard. The defendants concealed these incidents from the Coast Guard by making false statements to inspectors, and making false statements and omissions in the ship’s oil record book. When Coast Guard inspectors asked the engineers to operate the oil water separator during the inspection, the engineers did so in such a way that the equipment appeared to be working properly even though it was not.

"The detection, investigation and prosecution of the illegal discharge of oil was truly a team effort among Coast Guard marine safety professionals and the Department of Justice prosecutors," said Cmdr. Matt Edwards, chief of prevention at Coast Guard Sector Puget Sound. "While the vast majority of vessel owners run a safe and environmentally conscious operation, this case demonstrates our willingness to hold people and organizations accountable for willfully violating U.S. laws and regulations."

When Coast Guard inspectors examined the oil water separator they found its filters were clogged with oil and found oil residue in the overboard discharge piping.  Records indicated the oil water separator had not been serviced for months prior to the voyage from China. According to the official oil record book presented to the Coast Guard, bilge water had not been discharged during the voyage to Seattle. However, the Coast Guard investigation discovered evidence that oily water had been discharged into the sea three times on its voyage from China.

Calling it a voyage of deception and pollution, prosecutors argued that the engineers tried to hide the pollution from the Coast Guard to avoid having the ship detained in Seattle. Keeping the ship on schedule was a benefit to the owners and operators who had a contract to move $25 million in goods out of Seattle. Shipping company executives had been in contact with the engineers about how they should present the log book for the Coast Guard inspection.

The case is being prosecuted by Assistant United States Attorneys Seth Wilkinson and Matthew Diggs, and by Special Assistant Attorney Stephen Bor. Bor is an attorney with the United States Coast Guard specially appointed to prosecute criminal cases in federal court.

The case is being investigated by the U.S. Coast Guard and the Environmental Protection Agency Criminal Investigation Division.