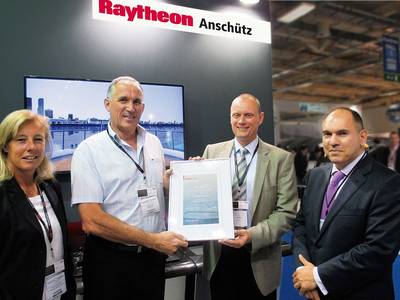 Handover ceremony of a certificate about the 15,000 Standard 22 during Posidonia 2014

Raytheon Anschütz, a German-based navigation system supplier, delivers its 15,000th Standard 22 Gyro Compass in June 2014. Onboard the superyacht Esmeralda the jubilee compass will replace an old Anschütz Standard 4 Gyro Compass which has been in operation for more than 30 years.

The new generation of the Anschütz Gyro Compass – Standard 22 – was presented 10 years ago at SMM in Hamburg. Today, approximately 1,800 Standard 22 compasses are sold per year.

The jubilee compass was sold through Aegean Electronics S.A., the exclusive distributor of Raytheon Anschütz in Greece, to the superyacht Esmeralda. To celebrate the jubilee an official ceremony took place during the recent Posidonia where a certificate was handed over to Aegean Electronics.

All Anschütz Standard 22 Gyro Compasses feature long gyrosphere lifetime and have a contact-free transmission of the gyro supply voltage and an optical signal transmission of the sensor data, which contributes to operational reliability and safety. Advanced functions like an independent transmitting magnetic compass as well as an individual speed error correction mode in double and triple compass systems continue to increase flexibility and reliability of the compass system. The Standard 22 is available in different system configurations from a single gyro compass for retrofit solution up to double and triple gyro compass system with redundancy in distribution for highest class notations and offshore service vessels with the possibility to integrate even more sensors such as the Horizon MF from Raytheon Anschütz.

The Esmeralda, a 62-meter long superyacht, was built in 1981 by the Italian shipyard Codecasa. Aegean Electronics is responsible for delivery and commissioning of the Standard 22 Gyro Compass to the yacht.