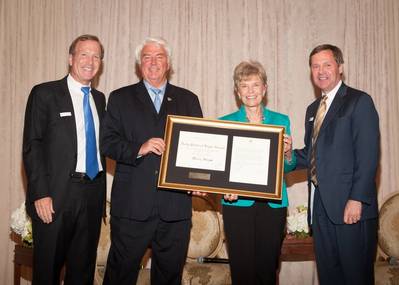 Mercy Ships, a global charity based in Garden Valley, Texas, operates the world’s largest civilian hospital ship. Mercy Ships founder Don Stephens was recognized this week with the Daily Point of Light Award from Points of Light, a U.S. organization dedicated to volunteer service. The national award was presented at a special event held at the River Oaks Country Club in Houston. The event, “Advancing Hope and Healing in Africa,” featured President George W. Bush and Laura Bush.

“I’m honored to be part of an organization that shines light where disease, hunger and poverty keep so many people in bondage. I accept this on behalf of all my coworkers in Mercy Ships,” said Stephens. “On behalf of the hundreds of volunteers, as well as those who support the work of Mercy Ships, it is an honor to receive this award. Our daily acts of service do indeed make a difference around the world.”

As a Daily Point of Light Award honoree, Stephens received a special commemorative certificate from Points of Light board chair Neil Bush and signed by Bush’s father, former president Bush.