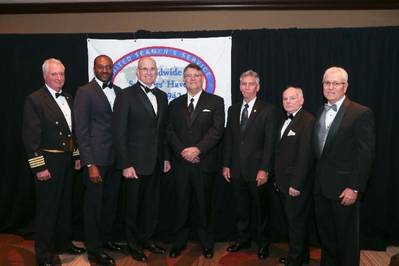 Six vessels and two individual mariners were recognized for courageous acts at sea at the 44th annual United Seamen's Service (USS) 2013 Admiral of the Ocean Sea Awards (AOTOS) attended by more than 700 guests at the Sheraton Times Square Hotel in New York City.

Rosette awards
1. On October 31st, 2012, Crowley Maritime Corporation's Tugboat GUARD was moving through the waters of San Francisco Bay and raced to the scene of a man struggling in the water and threw a life ring. Chief Engineer Keith Madding scrambled into a survival suit and jumped into the 55-degree water and guided the fatigued man on the climb up the GUARD'S emergency ladder.

2. The second Rosette was presented to U. S. Coast Guard Petty Officer Omar Alba, for his heroic and unselfish actions when on November 12, 2012, with terrible Alaska weather when the M/V POLAR WIND was in distress and grounded on Ukolnois Island, Alaska. Within minutes, Petty Officer Alba and the crew of helicopter CG 6544 were airborne, headed on a 240 nautical mile flight to the scene, where they found the grounded tug alongside a 200-foot cliff. Alba was
deployed by cable to the tug, where he put himself at risk but facilitated the rescue of five seafarers.

AOTOA Mariners' Plaque
The AOTOS Mariners' Plaque was presented to the Captain and Crew of the USNS Bowditch, Military Sealift Command, for their heroic act off the Tubbahata Reef, Philippines on January 17, 2013, where the grounding of an Avenger-class mine counter-measures ship triggered an immediate call for support from the oceanographic survey ship. In steadily deteriorating weather conditions with winds in excess of 25 knots, and associated high seas over the shallow reef. The USNS Bowditch joined MSC-chartered ship M/V C-Champion on scene, working closely with the Philippine Coast Guard.

The mission was to evacuate the grounded ship's 79-person crew and within three hours, all were safely evacuated. The seamanship and professionalism of the crew of USNS Bowditch were instrumental in saving 79 lives and helping protect a valuable marine resource from further damage. The crew's efforts were in keeping with the highest traditions of maritime service.