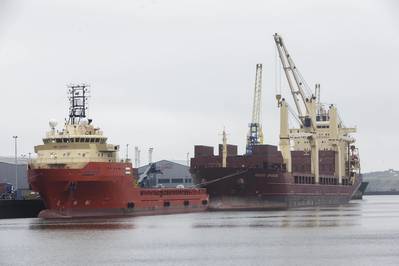 Aberdeen Harbor has welcomed the largest vessel to have docked in the city, as its latest plans for the proposed expansion at Nigg Bay continue on public display.

The MV Pacific Adventure, a general cargo and container vessel, which is 160 meters in length and 27 meters wide, now holds the record at the port with a gross tonnage of 19,128 metric tons, beating previous record holder, the diving support vessel, Skandi Arctic, by 488 metric tons. The Hartmann Project Lines vessel, under the agency of Euroline Shipping, recently arrived with a cargo of oilfield materials from Mauritania.

“Our ability to accommodate vessels of this size is thanks to a program of strategic engineering work, completed in 2012, which widened and deepened the navigation channel,” said Aberdeen Harbor chief executive Colin Parker. “It illustrates a trend towards bigger, more efficient vessels requiring access to Aberdeen and further reinforces the need for the development of a second, deeper port facility at Nigg Bay, if the North East of Scotland is to remain economically competitive.”

Plans for the proposed $516 million development at Nigg Bay have gone on display until October 31, at Aberdeen’s Maritime Museum, as part of an ongoing Development Framework consultation process, supported by Aberdeen City Council and Scottish Enterprise. The consultation is designed to investigate the potential benefits, opportunities or challenges that the Nigg Bay development might bring to the wider area of Altens, East Tullos and Torry.

The project, which the Harbor hopes will commence in 2017, is predicted to increase economic activity at the port to $3.22 billion per annum in 20 years and potentially create approximately 7,000 jobs.