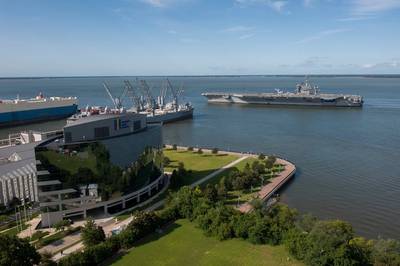 Newport News Shipbuilding (NNS), a division of Huntington Ingalls Industries, redelivered the flat-top following  successful sea trials that tested the ship's systems after its refueling and complex overhaul (RCOH) at the shipyard.

The sea trials, conducted by the U.S. Navy alongside NNS shipbuilders onboard, tested the carrier's systems and operations at sea, including high-speed operations. The trials team put the ship through a series of tests designed to prove system performance and demonstrate all the carrier's capabilities at sea.

"The ship's refueling and modernization was an enormous undertaking made successful by the joint efforts of the shipyard, Navy and government team," said Chris Miner, NNS' vice president, in-service aircraft carrier programs. "Her strong performance during sea trials is a source of pride for the 4,000 shipbuilders who worked tirelessly to return Roosevelt to the Navy's operational fleet today."

The RCOH process is performed only once during the ship's 50-year lifetime and involves upgrades to nearly every space and system on the ship. Tanks, the hull, shafting, propellers, rudders, piping, ventilation, electrical, combat and aviation support systems were repaired, upgraded and modernized. Work also included defueling and refueling the ship's two nuclear reactors and repairs and upgrades to the propulsion plant.

NNS is the only shipyard with the skilled workforce and facilities equipped for this nearly four-year project, which was described in a 2002 Rand Study as one of the most challenging and highly industrial tasks undertaken by any organization. The fourth Nimitz-class carrier to undergo an RCOH, Roosevelt has had up to 4,000 shipbuilders assigned to her at peak manning periods. USS Abraham Lincoln (CVN 72) arrived at NNS in March and is currently undergoing her RCOH.