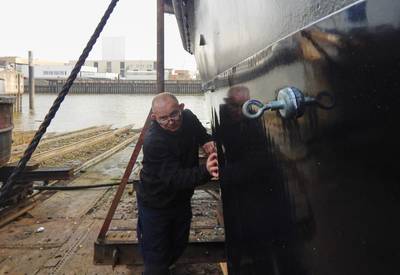 Setting new standards in the maritime industry with its fouling release film, the film manufacturer RENOLIT will be exhibiting and presenting its innovative films at Europort in Rotterdam.

In a few days, the fair, the business hub for the maritime sector, will start. From November 5-9, manufacturers and suppliers in shipbuilding, repair and conversion, ship owners, shipyard manager and ship designer from all over the world will visit the fair for networking and more.

The demand for alternative biocide-free antifouling coatings is constantly increasing, especially against the background of the EU biocide regulations. RENOLIT, a company located in Worms with 73 years of experience, has developed a product solving the problem of toxic antifouling coatings. The biocide-free fouling release film RENOLIT DOPLHIN S can be applied on ships and offshore structures; it is IMO-certified and thereby complies with the IMO AFS International Convention on the Harmful Anti-Fouling Systems on Ship (2001).

The unique feature of the film is its ability to turn a surface into an amphiphilic one. “Some studies have shown that there are certain types of barnacles which primarily adhere to hydrophobic surfaces while other types primarily adhere to hydrophilic surfaces. Unlike other antifouling coatings, the RENOLIT DOLPHIN S film combines hydrophobic and hydrophilic properties and is thereby amphiphilic”, says Laura Schied. Due to these attributes, marine organisms cannot entirely adhere to the ship´s hull; they are simply washed off by the speed of the moving vessel (above 7 knots).