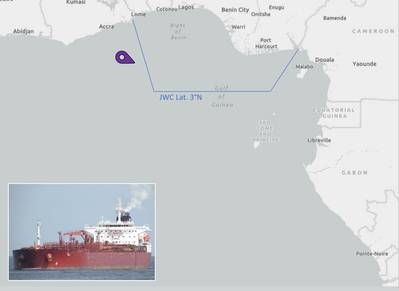 According to Praesidium, a maritime security intelligence firm, the tanker, which had left Lagos the day before, was approached on Friday around 0350 UTC by a small craft with six to eight persons aboard.

“Perpetrators attempted to board the vessel, but evasive maneuvers performed by the Master hampered their attempt. The vessel and crew are reported safe,” Praesidium said.

Having left Lagos, the tanker was reportedly sailing on an SW course at around 12.5 knots when it suddenly altered its course. The incident happened 113 nautic miles SSE off the city of Tema, Ghana.

"The pirates used a 12-14 m boat to approach the tanker and a metallic ladder for the boarding attempt. AP procedures were implemented and evasive measures were ultimately successful," Praesidium said.

According to the company, the position and the general sea conditions that characterize the Gulf of Guinea waters during this time of the year could possibly indicate the presence of a supporting craft although this cannot be confirmed.

Praesidium warned of more potential attacks soon: "Further possible boarding attempts can be expected East of the position of the attack, deep into the Nigerian EEZ in the next 48 to 96 hrs. The latest reported piracy attack in the general area occurred on July 2nd when Singapore-flagged general cargo vessel KOTA BUDI was attacked and successfully boarded by a group of pirates 152NM S of Cotonou. The attack resulted in the kidnapping of 5 crew members Maritime security intelligence company"