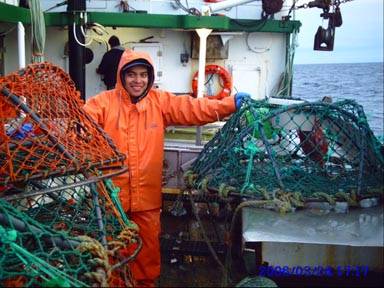 UMass Amherst Ecologists among the First to Record and Study Deep-sea Fish Noises.

University of Massachusetts Amherst fish biologists have published one of the first studies of deep-sea fish sounds in more than 50 years, collected from the sea floor about 2,237 feet (682 meters) below the North Atlantic. With recording technology now more affordable, Rodney Rountree, Francis Juanes and colleagues are exploring the idea that many fish make sounds to communicate with each other, especially those that live in the perpetual dark of the deep ocean.

Though little is known at present about the significance of sounds made by deep-sea fishes, Rountree and Juanes say that if, as their pilot study suggests, these tend to be low-amplitude, then man-made noise in the oceans may turn out to be a particular problem for some important species.

Their paper appears in the new book, “Effects of Noise on Aquatic Life,” from Springer Science+Business Media in its “Advances in Experimental Medicine and Biology” series. It compiles papers from an international workshop in Ireland in 2010.

Using hydrophones deployed by fishermen during normal fishing operations, Rountree, Juanes and colleagues obtained a 24-hour recording in Welkers Canyon south of Georges Bank that yielded “a wealth of biological sounds” including sounds of fin, humpback and pilot whales, dolphins and examples of at least 12 other unique and unidentified sounds they attribute to other whales or fish.

Their new paper includes graphics showing the number of these grunts, drumming and duck-like calls recorded per minute by time of day, plus peak volume and frequencies of various noises. Some of the sounds exhibited strong temporal patterns, for example fin whale and dolphin sounds dominated the recording and peaked at night.

Rountree, who makes a collection of fish sounds available on his popular website to engage and educate the public, explains, “We think work to describe underwater sounds is extremely valuable. The importance of sound in the ecology of both freshwater and marine systems is poorly understood. At this point, in fact, most of our work consists of making careful observations, which of course is the first step in the scientific process.”

He adds, “If sound is important to these deep sea fishes, it’s a whole area of ecology we need to know about. One reason is that fishermen are exploring deeper and deeper water to make their catch, and we need to know such things as the baseline populations of food fish, their requirements for spawning, their essential habitat and other key aspects of their lives. We believe passive acoustic monitoring is an important tool in this study. And, it doesn’t harm the fish or their habitat.”

Juanes says some fish use special “sonic muscles” to produce some sounds, and different sounds have different meanings or functions. Many are believed to be related to reproductive behavior. Some fish use a “sound map” for orientation in their immediate environment and may even use sound waves returning from distant beaches to help them navigate over longer distances. “There is a fascinating acoustic soundscape out there just waiting to be explored.”

Rountree adds, “It’s not only that some fish make sounds, but we think the overall soundscape is interesting and important.” This study was supported by MIT Sea Grant.

In addition to their deep-sea recording project, the researchers are conducting pioneering passive acoustic surveys of sound in many different habitats, such as freshwater ponds, rivers and streams and coastal estuaries of New England, as well as on the commercial fishing grounds in the Gulf of Maine.