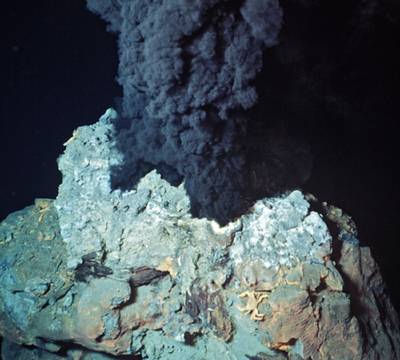 A new study led by scientists at the Woods Hole Oceanographic Institution (WHOI) points to the deep ocean as a major source of dissolved iron in the central Pacific Ocean. Researchers found that iron can travel long distances, highlighting the vital role ocean mixing plays in determining whether deep sources of iron reach the surface-dwelling life that need it to survive.

Iron is readily soluble in low oxygen regions at hydrothermal vent sites and along continental margins, but it was believed iron remained in these localized spots and contributed minimally to the ocean's overall iron content.

However, that is not the case, at least in the central pacific. "We found that much of the dissolved iron in that region originated from hydrothermal vents and sediments thousands of meters below the sea surface," said Tristan Horner, a postdoctoral fellow in the Marine Chemistry and Geochemistry Department at WHOI and lead author of the paper published  in Proceedings of the National Academy of Sciences. "And we found that the iron from these deep sources can be transported long distances."

While many areas of the ocean are rich in other nutrients, they often lack iron—a critical element for marine life.  Iron is particularly important for the growth of phytoplankton, which are tiny plant-like organisms that form the base of the ocean food chain and play an important role in Earth’s climate.

To conduct their investigation, the researchers analyzed a marine sediment, called a ferromanganese crust, taken from a spot far from any hydrothermal vent sites in the central Pacific Ocean.  The sample was collected from a dredge along the flank of the Karin Ridge, a seamount located in the central Pacific, in the 1980s by coauthor Jim Hein of the U.S. Geological Survey (USGS) in Santa Cruz.

The team used a mass spectrometer to analyze the sample for long-term changes in seawater isotopic chemistry recorded in the growth layers of the ferromanganese crust, which forms very slowly. Drilling cross sections in the sample allowed scientists  to analyze variations in the composition of iron isotopes—stable natural isotopes iron-56 and iron-54—in order to track the origins of iron.

"This study is exciting in that it applies some of the recently developed metal isotope capabilities to parse the different sources of scarce iron in seawater going back through time, and builds on the emerging story about the importance of hydrothermal vents to the inventory of iron in the sea," adds Mak Saito, a biogeochemist at WHOI and one of the coauthors of the study.

The researchers hope to use this technique to look at iron sources in other parts of the ocean. Future studies could help answer questions about global iron budgets, the influence of iron on climate, and the larger affect of hydrothermal vents on the ocean as a whole.