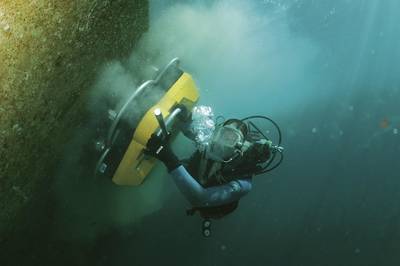 A new study seeks to determine the extent to which biofouling on ships’ hulls is contributing to the spread of invasive aquatic species in the Mediterranean Sea – a phenomenon commonly associated with ship ballasting operations.

According to recent research published by Tel Aviv University’s School of Zoology, half the ships passing along the Mediterranean coast of Israel are carrying invasive ascidians, presenting a global threat to ecosystems around the world.

TAU’s Dr. Noa Shenkar, who led the research, said, “These organisms are passing through the Suez Canal, latching onto ropes and the bottom of the ship. They're filter feeders, so they cover and clog every surface they latch onto, creating a lot of drag for the ship and damaging marine biodiversity in their new environments. They're a major threat to our coasts and are very costly to shipowners."

Among the wide occurrence of non-indigenous ascidians (NIA), TAU researchers also discovered a Caribbean species new to the region. The findings, state the authors of the report, “strongly support the hypothesis that marine vessels constitute a substantial vector for the introduction and dispersal of NIAs”.

Boud Van Rompay, founder and chairman of Belgium-based marine coatings supplier Subsea Industries, said, “The NIA threat is increasing because the antifouling systems in use since the TBT ban have been less effective in eliminating hull fouling. There is currently no miracle cure that will, on its own, prevent the spread of NIAs. The only known way of removing the threat is to clean the fouling organisms off mechanically, which is only possible with a hard-type coating. This ensures the underlying protective coating is not damaged. The industry has to consider taking a different approach to hull protection.”

This is a view supported by the research findings. The Monitoring the Magnitude of Marine Vessel Infestation by Non-Indigenous Ascidians in the Mediterranean paper states that “self-polishing hull coatings are ineffective” in controlling biofouling in “hidden and protected” areas.

The research also finds, “The method of rapid high-pressure fresh-water wash fails to provide adequate treatment for removal of invertebrates inhabiting internal hidden areas; especially ascidians, that can survive the dry-docked time outside the water. Of greater concern is that it allows vessels to continue their regular operations and at maximal speed for longer periods; conducting a thorough maintenance procedure every 3–4 years rather than every 1–2 years.”

Commenting on the findings, Van Rompay said, “This research substantiates what we said in January this year; that the entry into force of the Ballast Water Convention will not alone prevent the transfer of invasive aquatic species. There has to be mandatory legislation in place to prevent biofouling on ships’ hulls. Hopefully this research will generate greater awareness of the problem and result in appropriate action.”