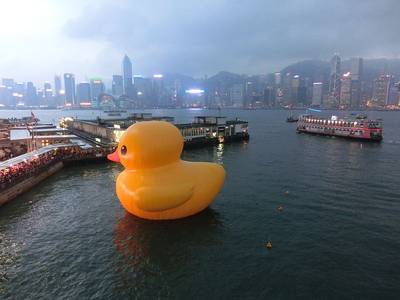 The world's largest rubber duck was lost to bad weather in China last week, but the giant duck is due to return larger than before for the Tall Ships Festival in Los Angeles

How do you lose a 59-foot giant rubber duck?  Torrential downpours and heavy flooding helped accomplish that task in China last week; but the loss of the enormous bath toy won’t impede plans for the duck’s West Coast debut at the Tall Ships Festival Los Angeles on Aug. 20.

According to Craig Samborski, executive producer of the Tall Ships Festival Los Angeles, not only will the gigantic rubber duck be on hand, but will be larger than the 59-foot model last seen in Taiwan. Constructing an original rubber duck for the event “has been the plan all along,” said Samborski.

Dutch artist Florentijn Hofman’s rubber duck was created to celebrate differences while bringing people together at large events such as the Tall Ships Festival Los Angeles and has made two appearances in the U.S., at unrelated events in Norfolk, Va., and Pittsburgh, Pa.

“The duck is a big part of festival, but the Tall Ships are also an exceedingly fun part of the event as well,” Samborski stated.  More than a dozen international and national Tall Ships will call the Port of Los Angeles home for four days.

Los Angeles can also expect to see a miniature, relatively speaking, 9-foot Baby Duck frequenting the area in a quest to find its mother leading up to the festival.  While children certainly tend to have their own agenda, the Baby Duck’s planned visits include Hollywood, Venice Beach, Children’s Hospital and City Hall.

A flurry of activity will surround the duck and Tall Ships at the Port of Los Angeles for the week of August 20-24 that include everything from live entertainment to food trucks and family friendly crafting stations.

Samborski said he is also considering a naming contest for the big yellow duck, but for now the jovial bird remains nameless.