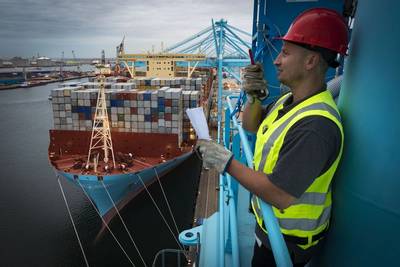 The 20,568 TEU Madrid Maersk, launched in March 2017 as the first of 11 of the second-generation Maersk Triple-E vessels to be delivered to the global container ship fleet, called APM Terminals Rotterdam on its maiden voyage on the Far East-Europe (AE-2) service operated by Maersk Line and Swiss-based Mediterranean Shipping’s 2M Alliance.

Keith Svendsen, APM Terminals Chief Operating Officer based in The Hague, Netherlands said “We are excited to welcome the Madrid Maersk to Rotterdam and deliver the operational excellence our customers expect.”
“With this maiden call of Madrid Maersk to Rotterdam, we have yet another opportunity to celebrate our good cooperation with the city, the port and APM Terminals,” added Mark Cairns, The Netherlands Managing Director for Maersk Line. As the latest addition to our modern fleet, this new vessel continues our commitment to serve our customers in The Netherlands and around the world in an even more efficient, environmentally-friendly and sustainable way.”
APM Terminals operates two terminals at the Port of Rotterdam, which is Europe’s busiest container port, and ranked 13th globally, with 12.3 million TEUs handled in 2016. APM Terminals Rotterdam, which opened in October 2000, handled 1.36 million TEUs in 2016, and APM Terminals Rotterdam Maasvlakte II handled 700,000 TEUs last year.