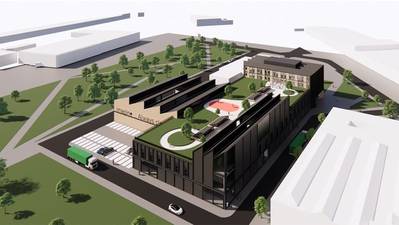 The Port of Rotterdam on Monday said it will help develop a 14,000 square metre factory for Battolyser Systems, a company that designs combined battery and green hydrogen production machines.

The port, which has announced a series of hydrogen-related deals this year, said it views the company, a spin-off from the Delft University of Technology, as an anchor for a part of the port that will be devoted to companies helping to get carbon out of supply chains.

"Companies in the port are already actively working on projects regarding production, imports, shipping, storage and use of green hydrogen," port CEO Allard Castelein said in a statement. "With this factory we add green hydrogen equipment manufacturing to that portfolio."

Battolyser, which has funding from entrepreneur Kees Koolen, is seeking to commercialize systems based on iron nickel batteries, which produce hydrogen by electrolysisusing electricity to "split" water—once fully charged.

The idea is that during the day, when electricity from wind and solar power is cheap and abundant, the battery will charge and convert power to hydrogen. And at night the system switches off and the battery may feed electricity back into the grid.

"So when there is an imbalance in power markets and prices shoot up, we can help balance that, so we can make money whilst balancing the grid," CEO Mattijs Slee said in an interview.

Battolysers are also the first locally made electrolyzers, he said. With many Dutch companies seeking to replace natural gas with hydrogen, demand for electrolyzers is expected to rise.

"Even though we are sort of the epicentre of hydrogen in Europe, we do not have a electrolyzer manufacturing facility, or capacity at all in the Netherlands," he said.