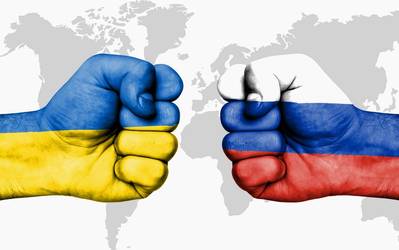 Russia on Monday ignored Western calls to release three Ukrainian naval ships it fired on and captured near Crimea at the weekend and accused Kiev of plotting with its Western allies to provoke a conflict.

Kiev in turn accused Russia of military aggression and put its armed forces on full combat alert, saying it reserved the right to defend itself. Ukrainian lawmakers were due to decide whether to introduce martial law for two months later on Monday, a move President Petro Poroshenko has backed.

With relations still raw after Russia's 2014 annexation of Crimea from Ukraine and its backing for a pro-Moscow insurgency in eastern Ukraine, the crisis risks pushing the two countries towards a wider conflict and there were early signs it was renewing Western calls for more sanctions on Moscow.

They had been trying to enter the Sea of Azov from the Black Sea. The FSB said it had opened a criminal case into what it called the ships' illegal entry into Russian territorial waters.

On Monday maritime traffic resumed in the Kerch Strait, which separates Crimea from the Russian mainland, but Moscow showed no sign of releasing the ships and their crews.

The stand-off is more combustible now than at any time in the past four years because Ukraine has rebuilt its armed forces, previously in disarray, and has a new generation of commanders who are confident and have a point to prove.

Kiev is also strengthened by the knowledge that most Western governments, especially Washington, lean towards Ukraine and are liable to view Russia’s version of events with some scepticism.

NATO called an emergency meeting with Ukraine on Monday after the alliance's head Jens Stoltenberg held a phone call with Poroshenko. He offered NATO's "full support for Ukraine's territorial integrity and sovereignty."

Domestic politics adds to the combustibility of the situation. Poroshenko faces a tough re-election fight early next year, with opinion polls showing him trailing his opponents.

Russia's President Vladimir Putin has also seen his high approval rating fall because of unpopular domestic policies. In the past, successful military action beyond Russia’s borders has buoyed his popularity.

Using bellicose language, the Russian foreign ministry accused Kiev of deliberately staging what it called a provocation to harm Russian interests and said it would react harshly to any attempts to undermine its sovereignty,

"It's obvious that this painstakingly thought-through and planned provocation was aimed at igniting another source of tension in the region in order to create a pretext to ramp up sanctions against Russia," the ministry said in a statement.

Russia's rouble currency weakened 1.4 percent against the dollar in Moscow on Monday, its biggest one-day fall since Nov. 9, while Russian dollar-bonds fell.

Markets are highly sensitive to anything that could trigger new Western sanctions, and therefore weaken the Russian economy. A fall in the price of oil -- Russia's biggest source of revenue -- has made its economy more vulnerable.