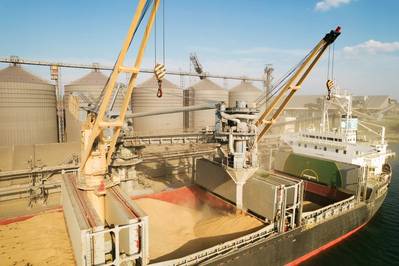 Russia said on Wednesday it would resume its participation in a deal to free up vital grain exports from war-torn Ukraine after suspending it over the weekend in a move that had threatened to exacerbate hunger across the world.

The Russian defense ministry said it had received written guarantees from Kyiv not to use the Black Sea grain corridor for military operations against Russia.

"The Russian Federation considers that the guarantees received at the moment appear sufficient, and resumes the implementation of the agreement," the ministry statement said.

Russia suspended its involvement in the deal on Saturday, saying it could not guarantee safety for civilian ships crossing the Black Sea because of an attack on its fleet there, part of which it said had originated from within the grains export corridor.

Ukraine has said that was a false pretext.

Turkish President Tayyip Erdogan said earlier that Russian Defence Minister Sergei Shoigu had told his Turkish counterpart that the July 22 grain deal, brokered by Turkey and the United Nations, would continue to operate as of midday on Wednesday.

"The grain transports will continue as agreed before as of 12 (pm) today," Erdogan said. The prices of wheat, soybeans, corn and rapeseed fell sharply on global markets following the announcement, which eased concerns about the growing unaffordability of food.

Ships have continued to carry Ukrainian grain on the route despite the suspension, but that had been unlikely to continue for long because insurance companies were not issuing new contracts due to Russia's move, industry sources told Reuters.

"This is quite an unexpected turnaround," Andrey Sizov, the head of Russia-focused Sovecon agriculture consultancy, said of Russia's decision. "Still, the deal remains shaky, as it is now back in guessing mode as to whether there will be an extension or not. With two weeks to go before the extension, the discussion around this topic will apparently continue," Sizov added.

The deal runs out on Nov. 19 and a European diplomat briefed on the grain talks has told Reuters that Russian President Vladimir Putin was likely to use the possible extension as a way to gain leverage and dominate next month's G20 summit in Indonesia.

German Foreign Minister Annalena Baerbock said the resumption showed how much countries could achieve together. "This is an expression of how important it is that those who believe in the international order...stand together in these difficult times and do not allow themselves to be blackmailed by Russia," she told broadcaster Welt.

Ukrainian President Volodymyr Zelenskiy said earlier that the world should respond firmly to any Russian attempts to disrupt Ukraine's export corridor across the Black Sea, which was blocked after Moscow invaded Ukraine on February 24.

The Russian blockade has exacerbated food shortages and a cost of living crisis in many countries as Ukraine is one of the world's biggest suppliers of grain and oilseeds. In a Tuesday night video address, Zelenskiy said ships were still moving out of Ukrainian ports with cargoes thanks to the work of Turkey and the United Nations.

"But a reliable and long-term defence is needed for the grain corridor," Zelenskiy said. "Russia must clearly be made aware that it will receive a tough response from the world to any steps to disrupt our food exports," Zelenskiy said.

"At issue here clearly are the lives of tens of millions of people." The grains deal aimed to help avert famine in poorer countries by injecting more wheat, sunflower oil and fertilizer into world markets and to ease a steep rise in prices.

It targeted the pre-war level of 5 million metric tonnes exported from Ukraine each month. Turkish Foreign Minister Mevlu Cavusoglu earlier said Russia was concerned about its fertilizer and grain exports, echoing Russian officials in saying ships carrying them could not dock even though the exports were not included in Western sanctions.

There was no mention of any concessions on those issues in the Russian statement on the resumption. Russian political analyst Tatiana Stanovaya said Moscow's decision to resume the agreement had nothing to do with any guarantees from Ukraine. "The Kremlin itself simply fell into a trap from which it did not know how to get out," she said.

"It was necessary to retreat and put on a good face (not very successfully) when faced with a bad game. That is, Putin, no matter how preoccupied he is with Ukraine, his historical mission and his faith that he's right, remains a moderately rational politician who knows how to retreat if necessary."

The U.S. Ambassador to the United Nations, Linda Thomas-Greenfield, told CNN she was "delighted" to hear about Russia's return to the agreement. "They can't stand in the way of feeding the entire world," she said.

(Reuters - Additional reporting by Ezgi Erkoyun in Ankara and other Reuters bureaux; Writing by Philippa Fletcher; Editing by Angus MacSwan)

A ship with Ukrainian wheat destined for Ethiopia arrived in port on Saturday, the first vessel to sail as part of a push…