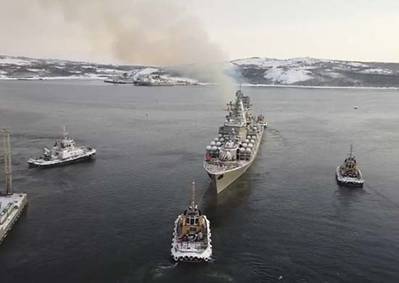 Russian warships entered the Barents Sea on Wednesday to rehearse protecting a major shipping lane in the Arctic, its Northern Fleet said on Wednesday, as Moscow stages sweeping military exercises involving all of its fleets.

Russian military moves are being closely watched by the West at a time when a troop build-up near its border with Ukraine has sparked fears of a conflict. Moscow has denied it plans to launch an attack on Ukraine.

Moscow said last week it would stage a series of drills involving all its fleets in the seas directly adjacent to Russia. The exercises will also include maneuvers in the Mediterranean, the North Sea, the Sea of Okhotsk, the northeast Atlantic Ocean and the Pacific.

Wednesday's drills in the Arctic, which involve around 30 warships, 20 aircraft and 1,200 personnel, are designed to assess troops' combat readiness in the Arctic and their ability to protect the Northern Sea Route.

The exercises will see troops rehearse repelling military threats and help "ensure the security of sea lanes and Russia's areas of maritime economic activity in the northern seas in the event of a crisis," the Northern Fleet said.

Russia has invested heavily in infrastructure to develop the Northern Sea Route and hopes it will become a major shipping lane as the Arctic warms at a faster rate than the rest of the world. It is not currently used in winter due to thick ice cover.

Russian authorities have said the country plans to begin year-round shipping via the Northern Sea Route in 2022 or 2023.