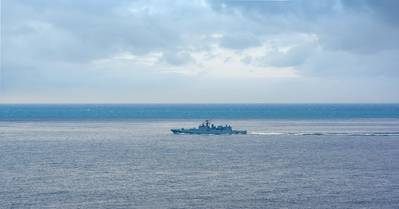 The Russian frigate Admiral Grigorovich left the port of Sevastopol in Crimea on Monday for the Mediterranean where it will join the country's naval forces deployed near the Syrian coast, a Russian source told Reuters.
The source did not provide further details. A Reuters witness saw the ship leaving its moorings in the naval port of Sevastopol.
The frigate was deployed to the Mediterranean Sea last November as part of Russia's naval task force to Syria where it launched cruise missile strikes against Islamic State targets.
The Russian navy was not immediately available for comment.

The Admiral Grigorovich is the first in the class of six frigates commissioned by the Russian navy in 2010 for its Black Sea Fleet.

China Pushing Sea Claims Under Cover of COVID-19 -US Commander