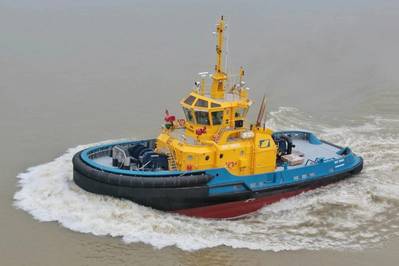 SST Grizzly and SST Orca, which are designed by Robert Allan Ltd, has departed Cheoy Lee’s Hin Lee shipyard, will arrive Vancouver in early November of this year.

The two new escort-rated tugs will join SST Canada’s fleet and begin operations in the southern waters of British Columbia. SST Canada is a joint venture partnership between Boskalis of the Netherlands and Saam S.A of Chile.

According to a press release from Robert Allan, these tugs will be capable of safely performing all ship-handling roles, including berthing, unberthing, and escort duties, and will considerably increase the ability of the local tug fleet to handle anticipated increases in vessel traffic through British Columbia’s southern waters, especially in the context of escort towing.

The vessels will become both the largest and most powerful escort-rated tugs in the region, with bollard pulls in excess of 80 tonnes, and the ability to generate high indirect escort forces at speeds of up to 10 knots, namely 82 metric tons in steering, and 130 metric tons in braking.

Complementing these escort performance capabilities will be an equally capable double (split) drum 200 kW electric escort towing winch by Ibercisa with an active haul-in and pay-out constant tension system, as well as data logging for aiding with timing of replacement of the 72 mm diameter Amsteel Blue synthetic towlines.

When launched, SST Grizzly was coincidentally also Cheoy Lee Shipyards’ 100th tug to a Robert Allan Ltd design. This will give SST Canada the very unique distinction of owning two milestone Robert Allan Ltd tugs, with the other being Uzmar Shipyard’s 100th tug, a RAstar 3200-W design which is currently under construction and due to arrive in Vancouver in early 2019.