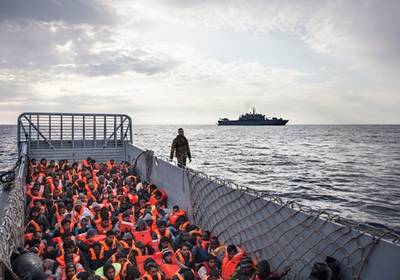 International Maritime Organization (IMO) Secretary-General, Koji Sekimizu, today called for coordinated action to safeguard migrants, following the most recent incident involving large-scale loss of life in the Mediterranean.
While recognizing the significant contribution of the coast guards and naval forces of Italy and Malta, EU Operation Triton and the merchant shipping industry in rescuing thousands of migrants, Sekimizu said, "The deaths of hundreds of migrants drowned in the Mediterranean within sight of a potential rescue ship once again highlight the need for urgent action to be taken against those unscrupulous criminals whose greed and lack of respect for human life allow them to cram hundreds of innocent, desperate people into unsuitable craft with no concern for their safety. At the same time, I call upon Governments and the wider international community to expedite their efforts to take coordinated action to safeguard migrants and to manage the flow of migrants across borders in ways that do not lead to them being exploited and taken to sea in unsafe craft."
He added, “The international maritime search and rescue system created through IMO instruments was not designed to handle the huge flows of migrants that are currently being seen in the Mediterranean.  In being compelled to embark these unsafe vessels, migrants are effectively being put into extreme danger as soon as they leave shore. The fact that migrants are drowning within sight of their would-be rescuers is testament to the dangers they face and every effort should be taken to find safer, managed routes for migrants.”
The Secretary General of IMO hosted an Inter-agency, High-Level Meeting to Address Unsafe Mixed Migration by Sea  at IMO Headquarters (March 4-5, 2015) to facilitate dialogue and promote enhanced cooperation and harmonization between United Nations agencies, international organizations, nongovernmental organizations, Governments and the shipping industry.

A Chinese carrier group is exercising near Taiwan and such drills will become regular, China’s navy said late on Monday in…