USCG Aids Rescue of 3 Sailors and a Dog off Bermuda 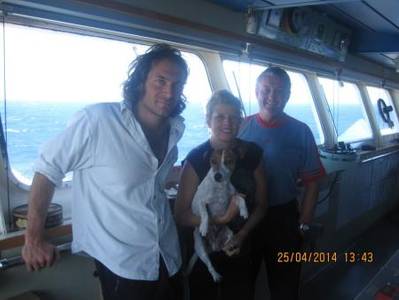 The USCG coordinated the rescue of three people and a dog Thursday, April 23, 2014 off Bermuda. The three people were rescued by the good Samaritan crew aboard the Tilda Kosan, a 351-foot tanker, after the 49-foot sailboat, the Blue Pearl, sank in the Atlantic Ocean. (Photo by crew of the Tilda Kosan provided to the U.S. Coast Guard)

The U.S. Coast Guard (USCG) coordinated the rescue of three people and a dog Thursday approximately 900 miles northeast of Bermuda.

The USCG said its 5th District Command Center watchstanders were contacted at approximately 6:30 p.m. by International Rescue Center personnel reporting they received a message from a satellite messenger device stating people were in a life raft and in need of assistance.

District command center watchstanders then conducted a search for the closest automated mutual-assistance vessel rescue (AMVER) ships to the distress and conducted an enhanced group call, a broadcast service using the inmarsat communication system, asking for rescue assistance from ships in the area. Three commercial vessels assisted in the search.

The crew aboard the Cape Mathilde, a 958-foot bulk carrier and AMVER ship, responded to the Coast Guard's request for assistance and diverted course from approximately 80 miles from the reported location of distress.

The crew aboard the Ouro Do Brasil, a 564-foot cargo ship, responded to the Coast Guard's EGC and diverted course with an estimated time of arrival to the distress of nine hours.

The crew aboard the Tilda Kosan, a 351-foot tanker, responded to the Coast Guard's EGC at approximately 10:30 p.m., reporting they were in the vicinity of the distress and willing to assist.

The crew aboard the Tilda Kosan located the life raft with three people and a dog aboard at approximately 12:30 a.m. Friday, transferred the people from the life raft onto the ship, and the survivors plan to remain aboard the ship, which is scheduled to pull into Bermuda.

"The presence and proper activation of the emergency position indicating radio beacon was instrumental in saving the crewmembers of the Blue Pearl," said Petty Officer 1st Class James Hines, a search and rescue controller at the 5th District Command Center. "This stresses the importance of a properly registered EPIRB, which provided us with an emergency point of contact and information on the boat."

No injuries were reported.