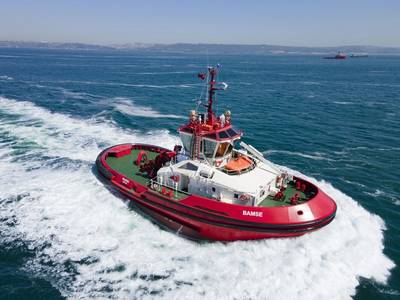 Sanmar has delivered its first Tier lll tugboat to Buksér og Berging AS, the first of two environmentally-friendly tugs ordered by the Norwegian operator. Built at Sanmar’s shipyard at Altinova in Turkey, the new tug has been named Bamse by its owners.

Based on the TRAktor 3000-Z design from Canadian naval architects Robert Allan Ltd, the 30.45m LOA Bamse has a molded beam of 12.8m and navigational draft of 6.35m. It was delivered at the end of May and will carry out escort duties from Brevik, in Norway. It is powered by two 2,200kW high speed engines driving CP propellers in an IMO Tier III emissions compliant installation.

As the tug will operate skeg/stern first for the vast majority of time, visibility over the stern has been optimized and the stern of the hull is ice strengthened for operations in light ice conditions. Accommodation is designed for a crew of up to seven with Master and Chief Engineer cabins located on the main deck and a single and two double crew cabins below.

Bamse has a bollard pull of 75 tonnes and is capable of generating a steering force in excess of 80 tonnes. It can achieve a speed ahead of 13 knots and has a fuel oil capacity of 126m3.

Ali Gurun, Vice President of Sanmar, said, “The TRAktor 3000-Z tugs prove that minimizing environmental impact does not have to come at the price of reducing power or performance.”

Bamse is the sixth tug delivered to Buksér og Berging by the Turkish builder and operator. In 2014 and 2015 Sanmar delivered five newbuild tugs to the Norwegian operator, including Borgoy and Bokn, the world’s first two purely liquefied natural gas (LNG)-fueled tugboats.