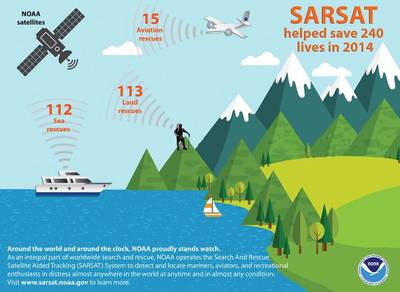 Last year, 240 people were saved from potentially life-threatening situations throughout the United States and its surrounding waters with help from NOAA’s fleet of weather satellites.
In addition to their role in weather forecasting, NOAA’s polar-orbiting and geostationary satellites can detect distress signals from emergency beacons carried by downed pilots, shipwrecked boaters and stranded hikers.  Information captured from these satellites, including location, are then relayed to first responders on the ground who assist with search and rescue efforts.
Of the 240 rescues in 2014, 112 were waterborne rescues, 15 were from aviation incidents and 113 were from events where small handheld devices called Personal Locator Beacons or PLBs were used.
Alaska had the most SARSAT rescues, with 78, lower than last year’s total of 99. Most of the incidents involved disabled snowmobiles in the North Slope region, and four people were rescued after their small plane crashed into a lake near Galena.
Florida had the second highest number of rescues, with 26.
Signals received by the NOAA satellites helped the U.S. Coast Guard to rescue five people from a capsized fishing vessel 20 miles off the Oregon coast.
The pilot of a small plane was rescued after he crashed into the sea, while flying from the Bahamas to Ft. Lauderdale, Florida, and another pilot was saved when his plane crashed in the sea on a flight from Florida to the Bahamas.
Four children and four adults were rescued off the coast of Hawaii in Kaiwi Channel after their boat sank.
NOAA satellites are part of the international Search and Rescue Satellite Aided Tracking System, known as COSPAS-SARSAT. This system uses a network of spacecraft to detect and locate distress signals quickly from emergency beacons onboard aircraft and boats, and from PLBs.
When a NOAA satellite finds the location of a distress signal, the information is relayed to the SARSAT Mission Control Center based at NOAA’s Satellite Operations Facility in Suitland, Maryland. From there, the information is quickly sent to a Rescue Coordination Center, operated by either the U.S. Air Force for land rescues, or the U.S. Coast Guard for water rescues.
“From helping rescue a lost hiker to finding a capsized fishing vessel to providing the data and information that underpins our daily weather forecasts, NOAA satellites help protect lives and property every day,” said Chris O’Connors, NOAA SARSAT program manager.
Since 1982, COSPAS-SARSAT has been credited with supporting more than 37,000 rescues worldwide, including more than 7,492 in the United States and its surrounding waters.

Will Container Shipping Woes of the 2010s Repeat?

Reduced volumes are currently posing a major challenge to container shipping due to the COVID-19 crisis. So far, freight…