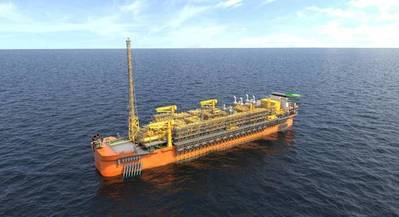 An illustration of a Fast4Ward FPSO. The image doesn't reflect the final look of the FPSO Alexandre de Gusmão. (© SBM Offshore)

Dutch floating oil and gas production firm SBM Offshore has secured a $620 million bridge loan facility for the financing of the construction of FPSO Alexandre de Gusmão, to be deployed in Brazil for Petrobras.

The FPSO Alexandre de Gusmão will be deployed at the Mero field in the Santos Basin offshore Brazil.

Mero is a project under Libra Consortium responsibility, in which Petrobras is the operator with 40 percent and with the following partners: Shell Brasil with 20 percent, TotalEnergies with 20 percent, CNODC and CNOOC Limited with 10 percent each, together with Pré-sal Petróleo S.A. (PPSA) as manager of this contract.

SBM Offshore said the loan had been secured by the special purpose company which will own FPSO Alexandre de Gusmão.

"Currently, SBM Offshore is the sole owner of this special purpose company. Discussions around the divestment of 45% of the equity ownership to partners continue to progress" SBM Offshore said.

"The facility will be fully drawn in the coming days to finance the ongoing construction of the FPSO Alexandre de Gusmão. The tenor of the bridge loan is twelve months with an extension option for another six months. Repayment is expected to take place upon closure and first drawdown of the project loan," the company added.

Petrobras and SBM Offshore signed the deal for the chartering and provision of services of the FPSO Alexandre de Gusmão in November.

This will be the fourth definitive floating production system to be installed in the Mero field, located in the pre-salt area of Brazil's Santos Basin. The FPSO is expected to start production in 2025.

The FPSO will be installed approximately 160 kilometers from Arraial do Cabo, in Rio de Janeiro, and will be capable of processing 180 thousand barrels of oil and 12 million cubic meters of gas per day. The contracts will last for 22 years and 6 months from the unit's final acceptance.

The project foresees the interconnection of 15 wells to the FPSO, 8 of which are oil producers, 6 water and gas injectors, 1 convertible well from producer to gas injector, through a subsea infrastructure composed of rigid production and injection pipelines and flexible service pipelines.

SBM Offshore will use its standardized hull Fast4Ward program for the project. SBM Offshore’s fifth MPF hull has been allocated to this project.

Per World Energy Reports (WER), the hull for the FPSO is under construction at CMHI in China. The hull was ordered by SBM Offshore on speculation in December 2019.

As previously mentioned, the FPSO Alexandre de Gusmão will be the fourth full production FPSO to be installed on the Mero NW complex through the mid-2020s. Mero Pilot, the 1st full production unit, has been leased from Modec. It is scheduled to begin producing in 2021. Mero 2 contract was awarded to SBM Offshore in June 2019 and is scheduled to begin production in 2023. Malaysia's MISC in August 2020 signed an LOI with Petrobras to supply an FPSO for the Mero #3 project.