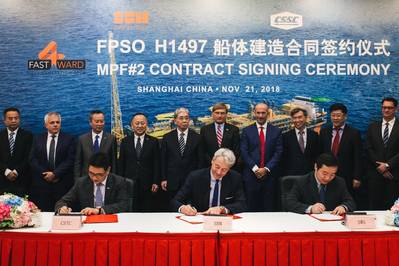 The order, which coincides with a keel laying ceremony for SBM's first Fast4Ward hull at the Shanghai shipyard, has been made before any engineering, procurement and construction (EPC) contract for the second hull. The Dutch company cited "continuing positive industry outlook" in its move to order the second floater.

“The timing of our Fast4Ward strategy fits in perfectly with the market upturn,” said SBM Offshore CEO Bruno Chabas. “We have been preparing for this exact scenario since 2014 and today, we see tangible evidence of how Fast4Ward matches the industry’s need for cost-conscious, standardized solutions, which de-risk and accelerate projects.”

“Major players are starting to invest in projects and are seriously considering our game-changing solution, as we saw with our July announcement of an FPSO FEED for the Liza development, which is based on our Fast4Ward program,” Chabas said.

The FPSO is designed to produce 220,000 barrels of oil per day and will have associated gas treatment capacity of 400 million cubic feet per day, as well as water injection capacity of 250,000 barrels per day.

The construction scope relates to the generic hull which, together with a catalog of topside options, forms the basis of the Fast4Ward FPSO.

The Fast4Ward concept, launched in May 2016 at OTC Houston, aims to deliver an optimized FPSO design through standardized specifications, in order to lower costs and accelerate delivery. The generic hull has been granted Basic Design Approval from the American Bureau of Shipping (ABS) and Bureau Veritas (BV).

SBM announced in August 2017 that it was moving forward with its Fast4Ward project on speculation, with a contract for its first new-build, multipurpose hull with China Shipbuilding Trading Company, Ltd. (CSTC) and the SWS shipyard. First steel was cut for this hull in March 2018. 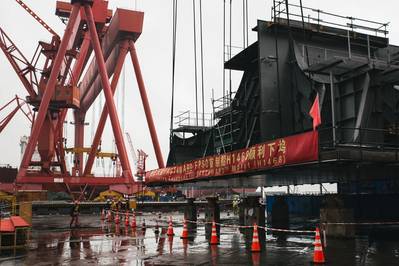 Construction of the first Fast4Ward FPSO hull is underway at SWS in Shanghai (Photo: SBM Offshore)

In July 2018, SBM announced it had been awarded Front End Engineering and Design (FEED) contracts based on its Fast4Ward program for ExxonMobil’s second Liza FPSO development offshore Guyana. Following FEED, and subject to requisite government approvals and project sanction, SBM will construct and install, then lease and operate the FPSO for a period of up to two years.

SBM announced in its August 2018 Half-Year Earnings report that it intends to apply the Fast4Ward philosophy to its overall offering.