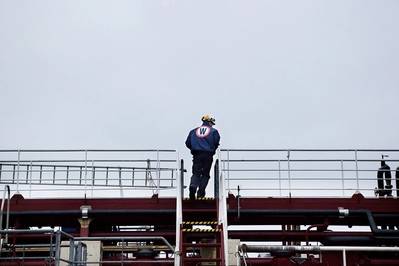 Traders and shipping companies scrambled to source fuel and take over supply contracts on Friday after Danish marine fuel supplier OW Bunker said a suspected fraud at its Singapore subsidiary had pushed it to the brink of bankruptcy.

The alleged fraud at Singapore-based subsidiary Dynamic Oil Trading is potentially one of the biggest financial market scandals to hit the city state since 2004, when China Aviation Oil (Singapore) ran up oil futures losses of $550 million.

Some institutional and individual investors in Denmark said they were considering taking legal action against the firm.

"As an investor who invested in the company ... based on the prospectus, to lose all your money seven months later, you have to think about what you can do," said Jan Ostergaard, head of investment at Industriens Pension, which holds a small stake.

The collapse of Denmark's third largest company by revenue with around 20,000 shareholders came as a shock to the Danish Shareholders Association, which hosted special events with management from OW Bunker ahead of its March initial public offering.

The head of the association told Reuters that management was repeatedly asked about what changes in oil prices might do to the company and whether they were able to control credit given to customers.

"We are shocked by the fact that these seem to be the two main reasons for the company's fall," Jens Moller Nielsen said.

Moller's lawyer Arvid Andersen told Reuters that Moller denies any illegal activities have been going on. Andersen said that what had happened was due to an "untimely lack of care" and that OW Bunker has been too quick to jump to conclusions about the situation.

"The case is not that somebody has stolen money, billed fictitious trades or given kickbacks. The case is that a big credit given to one customer was built up," Andersen said.

OW Bunker said earlier this week it had been informed about a fraud committed by senior employees in Singapore.

According to Andersen, it is only a question whether internal guidelines have been broken or not. He declined to disclose the name of the customer which had the big credit line.

Moller, who a person that knows him said was a popular member of the Danish expat community, could not be reached for comment at Dynamic's office in Singapore on Friday.

No-one was present at his home in a luxury condominium near the city-state's Botanic Gardens.

Singapore Police Force's white collar crimes unit declined to comment on whether they were investigating Dynamic.

Danish police have contacted the company.

"So far we have been told the company is conducting an internal investigation," said Chief Superintendent Michael Kjeldgaard.

He said it was not clear where the suspected crimes actually took place, and so he was uncertain if the case would be investigated by police in Singapore or Denmark.

OW Bunker said on Thursday that investors needed to assume that the company's equity had been wiped out due to losses at Dynamic estimated to be around $125 million.

The company did not give any details of the alleged fraud, but several traders said the problem was likely to be related to the recent sharp fall in oil prices.

The company, whose shares have been suspended, said it had fired its head of risk management.

Domino Effect?
Dynamic Oil Trading was launched in 2012, but it is not mentioned in a 291-page prospectus published ahead of OW Bunker's IPO.

According to Singapore's Maritime and Port Authority, OW Bunker went from 30th biggest bunker supplier in 2012 to 13th place a year later, judged by volume.

The company is estimated to have about 7 percent of the global market for bunker, a liquid fuel refined from crude oil and used to power ships, competing with companies such as World Fuel Services Corp, Chemoil Energy and Aegean Marine Petroleum Network.

Traders said refineries and other shipping fuel suppliers were cutting deliveries and were likely to cancel long-term contracts with the Danish company.

On Friday, at Dynamic's office in Singapore, trading desks were largely empty while the few staff who were present told Reuters reporters they were waiting for instructions from headquarters.

Two people who visited the office, on the 11th floor of the art-deco inspired Parkview skyscraper, told Reuters their Singapore-based firm had supplied Dynamic with oil and they were waiting to see whether they would be paid.

Legal sources in Singapore said that they had received several calls from counterparty firms concerned about what they could do to ensure payment for their trades with OW Bunker.

A bunker fuel trader in Europe said that many vessel owners and operators were cancelling their orders with OW Bunker, but that the fallout in the market would still be considerable if the company went down without paying out its existing positions.