Sea Mines Float Between Ukraine’s Grain Stocks and the World 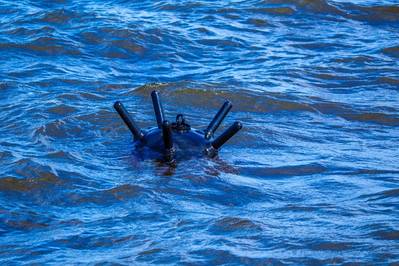 As the United Nations tries to broker a path for grain from Ukraine and temper worries about a global food crisis, hundreds of mines laid along the Black Sea present a practical nightmare that will take months to resolve even after any agreement.

The Black Sea is crucial for shipment of grain, oil and oil products. Its waters are shared by Bulgaria, Romania, Georgia and Turkey, as well as Ukraine and Russia.

Ukrainian government officials estimate 20 million tonnes of grain are unable to travel from what was the world's fourth largest exporter prior to the Russian invasion on Feb. 24.

Kyiv and Western leaders accuse Moscow of weaponizing food supplies by blockading Ukrainian ports. Russia has said it wants Western sanctions lifted as part of any deal to allow exports to flow.

But even if any agreement was reached and Ukraine’s ports were able to re-open, the danger from sea mines planted by Ukraine and Russia will hold up shipments potentially for months ahead, according to maritime officials.

"Sea mines have been laid in port approaches and some port exits are blocked by sunken barges and cranes," said a spokesperson with U.N. shipping agency the International Maritime Organization, one of several bodies working on establishing sea passage for grain supplies.

Food prices
Global grain production is forecast to fall short of demand in the 2022/23 season, the International Grains Council says.

The loss of Ukraine shipments will further tighten available supplies and is likely to drive up prices for food staples such as bread, pasta and noodles and add to food inflation, with global hunger already at unprecedented levels.

It is unclear what types of mines have been laid at this stage, Western maritime officials say.

A Ukrainian foreign ministry official told Reuters in March that some 372 sea mines laid by Russia were of the “R-421-75” type, which were neither registered with or used by Ukraine's navy currently and were captured by the Russian military during Moscow's annexation of Crimea in 2014.

Russia’s defense ministry said in a statement in March that Ukraine had mined the approaches to the ports of Odesa, Ochakov, Chornomorsk and Yuzhny with 400 obsolete anchor mines.

Russia's FSB intelligence agency also said in March mines had drifted into the Black Sea after breaking off from cables near Ukrainian ports, adding the mines were set by Ukrainian forces. Ukraine said at the time the FSB warning was wrong and it had no information about any mines drifting out to sea.

On Friday, the Ukrainian foreign ministry official said Ukraine had placed some mines. "We have installed naval mines in the exercise of our right to self-defense as stipulated under the Article 51 of the U.N. Charter."

Russia's embassy in London referred comment to the country's defense ministry, which did not immediately respond to an emailed request on Friday.

Russia's defense ministry said on May 26 Mariupol harbor had been cleared of mines and urged foreign governments to "exert effective influence on the owners of the vessels in Mariupol port to remove them to their permanent mooring place".

Some 84 foreign ships are still stuck in Ukrainian ports -- many of which have grain cargoes onboard.

Beaches in Odesa are closed with signs warning of mines. Read full story Some of the munitions have drifted as far as Turkey and Romania.

"It’s not safe for ships to get in or get out at the moment. Until the mines are swept, that situation is not going to change," said Guy Platten, secretary general of the International Chamber of Shipping, which is also working on opening up maritime channels.

Two seafarers have already died and seven merchant vessels been hit by projectiles - with two sunk - around Ukraine's coast while London’s insurance market has placed the entire region on its high risk list meaning soaring costs for shipments.

"Underwriters for their part would need some kind of assurance that it's been done to a given degree by competent minesweepers," said Neil Roberts, head of marine and aviation with the LMA, which represents the interests of all underwriting businesses in the Lloyd’s of London insurance market.

Clearing mines
Any mine clearing effort would be the biggest attempted since the Iran-Iraq war of the 1980s.

Intelligence on the types of mines laid and where they are located would be required at the outset, said Gerry Northwood, a former captain who commanded warships with Britain's Royal Navy.

"Mine hunters would also need to be equipped with remotely operated submersibles to locate and destroy the mines," said Northwood, a consultant with maritime security company MAST.

While the Black Sea is not particularly tidal or with strong currents, floating mines can still move significant distances over a period of time, said Duncan Potts, a former vice admiral with Britain’s Royal Navy.

"What is happening in Ukraine is that there appear to be a number of floating, untethered mines that are as much of a threat to you as to your enemy and are unpredictable," said Potts who now acts as a consultant to Western governments.

U.N. Secretary-General Antonio Guterres said on Wednesday that senior U.N. officials had held talks with Ankara, Brussels, Kyiv, Moscow, and Washington in the past 10 days on safe passage for the grain.

An EU official said any talk of what the bloc would specifically do to help demining was "very hypothetical", adding that Russia must start clearing the mines it had placed.

"Unless that is achieved, there won’t be sea corridors," the official told Reuters. "We won’t pressure Ukraine to give up their defenses. Any deal that could be done needs to be acceptable to Ukraine."

Maritime sources say an agreement would also be needed over which navies could be used to carry out the work that would be acceptable for commercial companies and insurers due to potential mistrust of any Russian effort.