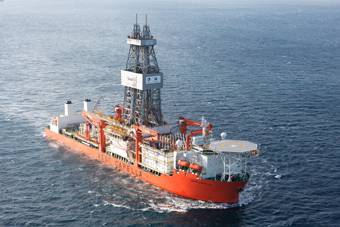 Offshore rig driller Seadrill is facing another two years in the doldrums but hopes the international rig market could turn around in 2017.
Rig rates have more than halved since the peak two to three years ago and in several cases are now below breakeven costs.
"2015 is gone, 2016 is ugly but what we see is that some oil companies are asking for extensions in 2017," Chief Executive Per Wullf told the DNB investor conference in Oslo on Thursday.
"The oil price is decisive," Wullf said.
But for the time being, the market remains depressed and Wullf said he was willing accept contracts at sharply lower rates than previously to secure them.
"It's a fight for every contract", Wullf said.
He said he could accept day rates down to $160,000-$180,000 on shorter contracts for drillships in the deepwater market which peaked around $600,000-$700,000 two to three years ago.
On longer contracts he said he could not accept a rate below $350,000-$400,000 per day.
Seadrill has a backlog of orders of around $14 billion and cash of $1.2 billion and expects to build up its cashpile to $1.6 billion next year.
In addition, the company has $2 billion of debt maturing in 2017.
(Reporting by Ole Petter Skonnord, editing by David Evans)