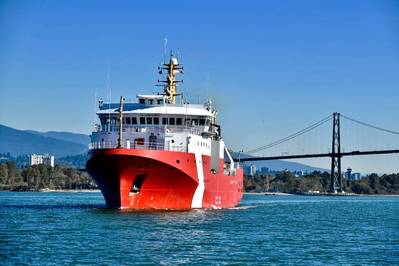 The future Capt. Jacques Cartier, the second of three Offshore Fisheries Science Vessels (OFSV) to be designed and built by Seaspan at its Vancouver Shipyards (VSY), began sea trials on October 10, 2019 from Seaspan’s Vancouver Drydock where final outfitting, set to work and commissioning has taken place since its launch in June.

“With the future Capt. Jacques Cartier headed out to sea today, excitement in our NSS program is growing,” said Mark Lamarre, CEO, Seaspan Shipyards. I” want to thank all our employees, partners and most especially our Coast Guard community for your teamwork and dedication in achieving this major milestone. We are looking forward to delivering this second vessel to the Coast Guard later this year, which will enable them to do their critical work focused on the protection, preservation and conservation of Canada’s coastal waters.”

Given the important scientific work to be performed by the OFSV Class, specific attention is also given during Sea Trials to the extensive array of ship sensors that are embedded in the ship’s Drop Keel and to the quietness with which the ship’s engines perform at cruising and at fishing speeds and when in idle.

Sea Trials will be largely conducted in the Strait of Georgia as part of a continuous 15-day exercise. Upon completion of Sea Trials, the ship will be moored at Ogden Point on Vancouver Island to prepare the vessel for Delivery to the Canadian Coast Guard, which is scheduled for later this year.