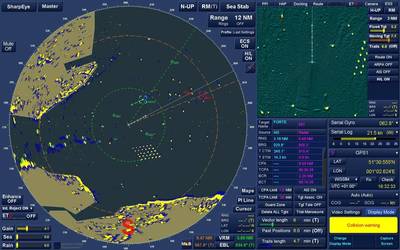 As part of the Lockheed Martin Canada prime contract for the Frigate Systems Upgrade project, a contract has been awarded to Kelvin Hughes to supply SharpEye radars and with an Agile Tracker to the New Zealand (NZ) Ministry of Defense.
Kelvin Hughes will supply its S-Band solid state upmast 2D navigation and surveillance radar SharpEye, for two ship sets along with their tactical Naval MantaDigital display software and processors. The NZ Ministry of Defense has also selected Kelvin Hughes’ agile tracker option providing advanced target tracking capability for low level air and surface based targets.
The contract covers the supply of the advanced upmast SharpEye sensor, integrated housing and turning unit, antenna assembly, radar processor, software and integration with the combat management system, along with project deliverables from installation to sea acceptance, training and in-service support.
According to the manufacturer, SharpEye, with its inherent solid state design (no magnetron), is highly reliable, enabling the transceiver itself to be mounted upmast with the need for maintenance access being almost completely eradicated. SharpEye’s design provides a very low noise system, the patented pulse sequence and pulse compression techniques ensures radar targets/contacts out at sea are detected and tracked typically earlier and at longer ranges than comparable systems.
The frigates TE KAHA and TE MANA are benefitting from a NZ$446 million upgrade of the combat and related systems and SharpEye is one of the sensors within the suite of sensors and systems of the Lockheed Martin Canada upgrade under contract to the NZ Ministry of Defense.
The combat system upgrade means the Royal New Zealand Navy will be operating these ships through to the end of their service life.