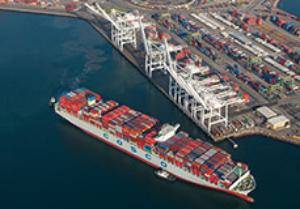 Port of Long Beach sees jump in shipments with easing of congestion
Cargo surged upward in March at the Port of Long Beach with a 32 percent increase over the same month last year, making it the busiest March in the Port’s history.
A total of 630,084 TEUs (twenty-foot equivalent units) were moved through the Port. (The second-busiest March on record was in 2006 with 561,194 TEUs.) Imports were recorded at 317,520 TEUs, a 42.1 percent increase from last year. Exports decreased 17.3 percent to 127,337 TEUs. Empty containers increased 85.4 percent to 185,227 TEUs. With imports exceeding exports, empty containers are sent overseas to be refilled with goods. As the months-long congestion eased in March, a great deal of empty containers were waiting to be shipped.
Additionally, March 2015 became the busiest month for containerized cargo since August 2013. Despite the strong month, cargo at the Port of Long Beach is down 3.3 percent for the first three months of the year, compared to the same period in 2014.
March numbers increased after terminal operators and dockworkers agreed to a tentative contract settlement at the end of February. At the same time a new system to pool the chassis that truckers use to haul cargo was launched to ease equipment shortages. Activity ramped up as the terminals and labor significantly cleared the backlog of cargo that had built up over several months of congestion at West Coast ports.
With an ongoing $4 billion program to modernize its facilities, the Port of Long Beach continues to invest in long-term, environmentally sustainable growth.

Jones Capital said it has acquired Rockport Terminals, one of the largest private intermodal terminals on the Texas Gulf…