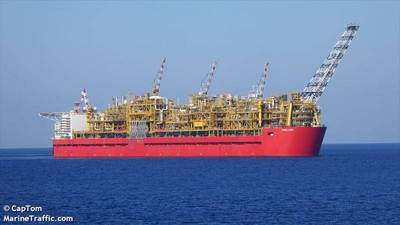 Shell Plc said on Wednesday liquefied natural gas (LNG) shipments from its Prelude floating facility off northwest Australia would be disrupted for at least two weeks due to work bans by unions fighting for better pay.

Loading disruption at the 3.6-million-tonnes-a-year facility adds to tightness in a global LNG market just as Europe scrambles to secure cargoes to make up for lost Russian gas supply. One of the largest U.S. LNG plants, Freeport LNG is also undergoing an extended outage.

"We have issued a notice to customers that cargoes will be impacted until at least mid-July due to the industrial action," a Shell spokesperson said in an emailed comment.

When operating normally, the site typically loads a tanker every seven to 10 days, which suggests that loading of at least two cargoes will be prevented during the industrial action.

Workers on Prelude began 12 days of industrial action on June 10 over a pay dispute. The action has now been extended to July 14, Shell and the Australian Workers' Union said.

The Australian Workers' Union says Shell has yet to meet some of its demands, including one that would stop Shell from hiring contract workers at lower pay than the company's employees doing the same job.

(Reuters - Reporting by Renju Jose in Sydney and Sonali Paul in Melbourne; Editing by Jacqueline Wong and Bradley Perrett)

With passage of the Inflation Reduction Act, which contains US$370 billion for climate and energy programs, policy experts…