Ship with Hundreds of Afghan Migrants Docks at Greek Port 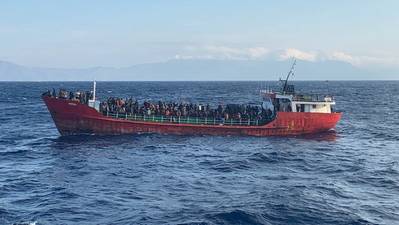 A Turkish-flagged cargo ship carrying 382 mostly Afghan migrants docked safely at a Greek island's port early on Sunday, two days after losing power in the Aegean Sea and sending out a distress signal.

Six people among what was the country's biggest single influx of migrants in years were detained after the vessel, the Murat 729, was towed into Kos port by a Greek coast guard ship, the migration ministry said.

The other arrivals were taken to a reception centre on the island. Their stay at the center, where they will be processed and quarantined, will be temporary, the ministry said.

Greece has been the main route into the European Union for asylum-seekers arriving from Turkey. The number of arrivals has fallen sharply since 2016 after the EU and Ankara agreed a deal to stop migrants from crossing to Greece.

Since the Taliban takeover of Afghanistan in August, however, many EU states fear a replay of the refugee crisis of 2015, when nearly 1 million people, mainly Syrian refugees, arrived in the EU after crossing to Greek islands close to Turkey.

On Tuesday, four migrants, three of them children, drowned after a boat in which they and 23 others were trying to cross from Turkey to Greece sank off the island of Chios.