Portugal’s Navalrocha Shipyard reports that it is continuing its robust performance through the ongoing Covid-19 pandemic with a steady pipeline of work through to 2024, with the first six months of 2021 including a series ofdrydock projects involving general cargo vessels, tugs, passenger ferries, bunker tankers, Ro-Ro Pax vessels, LPG carriers and cruise vessels.

According to Navalrocha commercial director Sergio Rodrigues, order volumes are running ahead of each of the last three years, with close to 50 tenders completed, and expectations to break the 100-tender barrier before year end.

“The outlook for the remainder of 2021 is looking very promising with several high-profile bookings already placed for summer and autumn involving bunker vessels, tugs, cement carriers and naval hydrographic survey vessels to name a few," said Rodrigues. "On another positive note, we are also seeing a resurgence in cruise sector work with a string of projects placed over the next 24 months.”

By the spring, Transinsular booked the recently converted Dona Tututa Ro-ro passenger ferry for a 38-day project involving complete blasting and painting, steel renewal and extensive repairs to the stern-ramp. Later in April, the Santos LPG Carrier, managed by Singapore based Executive Ship Management, entered for a reclassification, involving blasting and painting, propeller shaft removal and inspection, along with repairs to valves, pumps and mechanical equipment. This marked a company first for Navalrocha with all repair work coordinated with a remote superintendent via video conference calls.

Also, in April, the Garça Branca passenger ferry from Atlantic Ferries underwent a 20-day drydocking for reclassification, painting and mechanical work, before the yard welcomed its first cruise sector job of the year with the arrival of SeaDream II operated by SeaDream Yacht Club for a 35-day project. Widescale refurbishment included blasting, painting, steel renewal and piping work alongside overhauls to luxury passenger accommodation and public areas. Rounding off the period, in late May the yard completed a 12-day pontoon inspection, painting and repair contract for Confeitaria Nacional River Cruise’s Lisboa Vista Do Tejo. 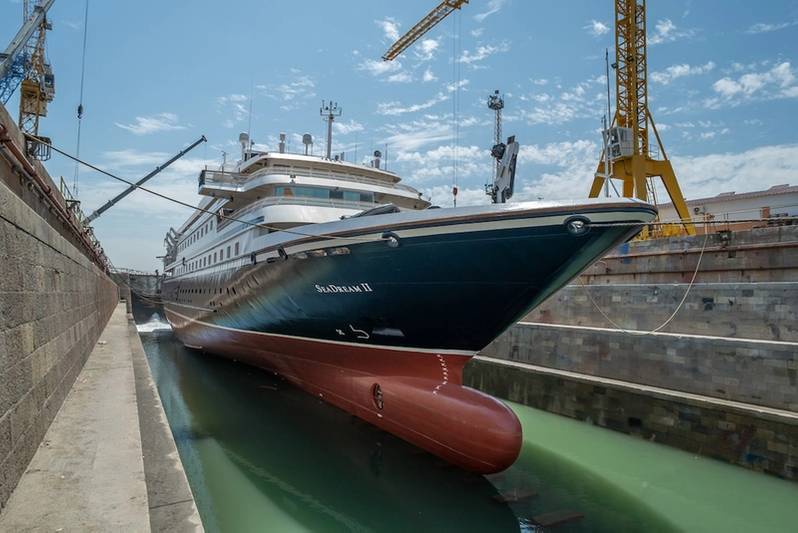 The yard welcomed its first cruise sector job of the year with the arrival of SeaDream II operated by SeaDream Yacht Club for a 35-day project. Image courtesy Navalrocha Shipyard