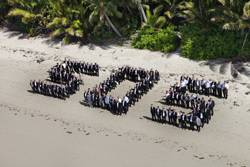 Shipowners from all over Asia gathered to form a massive human SOS as a demonstration of their support for the international SOS SaveOurSeafarers campaign. The gesture was photographed during the meetings this week in Australia of the 21st Asian Shipowners Forum (ASF) which had piracy at the top of their agenda.

In the last 7 years, 62 seafarers have died as a result of pirate actions, and getting on for 4,000 have been held hostage on some 200 ships hijacked by Somali pirates. "These innocent seafarers, just doing their jobs to keep the world supplied with raw materials and finished goods, get hijacked and suffer extreme mental and physical torture. We call on the world to take note that these people are working and putting themselves on the front line for you,” says Alastair Evitt, Chairman of SOS SaveOurSeafarers.
Noel Hart, Chairman of the 21st ASF, says, “The operation carried out by EU Naval Forces on 15 May 2012 to disrupt pirate supplies and bases on the Somali shoreline is welcome and has sent a clear signal that piracy cannot be tolerated. Blatant attacks on innocent ships and seafarers must be stopped."
The Seafarers Committee of the ASF once again expressed its strong concern at the trauma, agony, suffering and lasting psychological and physical effects on seafarers and their families due to pirate attacks. Li Shanmin, Chairman of the Seafarers Committee, says, “The situation continues to be a serious crisis, one that deeply affects the mental health of seafarers and their families. The threat cannot be forgotten and we demand that all possible action is taken to alleviate the situation."
http://www.saveourseafarers.com