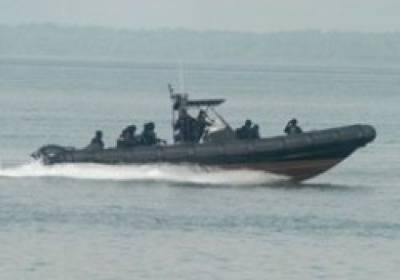 The International Maritime Bureau (IMB) of the International Chamber of Commerce informs that in 2014 there have already been reports of two incidents in Indonesian waters and one off the west coast of Africa in the first week of 2014, as follows:

Muara Berau Anchorage,Samarinda, Indonesia
Three robbers armed with a gun boarded a bulk carrier carrying out loading operations at anchor. They took hostage the duty A/B on routine rounds, tied him up and stole his personal effects. The robbers then broke into the forecastle store, stole ship's property and escaped. The A/B managed to untie himself and reported the incident to the duty officer.

Around 55nm West of Corisco Island, Gabon
Five pirates boarded a drifting gas carrier. Alert crew raised the alarm and blew the ship's horn resulting in the pirates escaping. Master reported that there were a few tugboats and unlit fishing vessels without AIS in the vicinity.