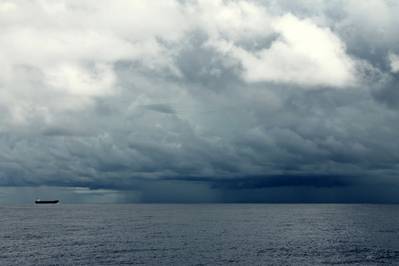 Global oil and shipping markets reacted nervously on Tuesday after an international arbitration court ruled against Beijing's claims across large swathes of the South China Sea, fuelling geopolitical tensions in the vital waterway.
A tribunal in The Hague, Netherlands, found China had breached the sovereign rights of the Philippines and had no legal basis to its historic claims in the South China Sea, a major shipping lane between Europe, the Middle East and Africa.
The ruling will be seen as a victory by other regional claimants such the Philippines and Vietnam, but with China rejecting the ruling and saying its military would defend its sovereign rights, nerves were on edge.
Although shippers and oil traders said they did not expect an immediate impact on shipping as a result of the ruling, oil prices jumped following the findings. Brent crude futures were up over $1, or more than 2 percent, to $47.60 per barrel at 1110 GMT.
"It is vital that merchant ships are allowed to go about their lawful business on the world's oceans without diversion or delay. We will of course be monitoring for any interference in the coming weeks," said Peter Hinchliffe, Secretary General of the International Chamber of Shipping in London.
The deep waters of the South China Basin between the Spratly and also-disputed Paracel Islands are the most direct shipping lane between northeast Asia's industrial hubs of China, Japan and South Korea and Europe and the Middle East.
The geography of the region offers few economically viable alternative routes for large oil tankers or dry-bulk ships and container ships.
Esben Poulsson, president of the Singapore Shipping Association, said any actions that restricted the right of innocent passage and freedom of safe navigation for merchant shipping would potentially drive up shipping costs, resulting in a detrimental impact on maritime trade.
Reuters shipping data shows that, counting just Very Large Crude Carrier (VLCC) super-tankers, some 25 VLCCs are passing between the disputed Spratly and Paracel islands at any time, with enough capacity to carry the equivalent of about 11 days' worth of Japanese demand.
Some industry participants were more relaxed, however.
"It's just pure politics," Ralph Leszczynski, head of research at ship broker Banchero Costa said.
"China will simply ignore it, and it will not change in any way the reality on the ground. All there is at stake is access to offshore oil and gas deposits and perhaps fishing grounds," he said.
Insurers said costs were unlikely to rise in the short term.
"We don't currently foresee any increase in insurance costs as a result of the ruling and would be surprised to see operators being penalised by the insurance market for trading in this area," said Andrew Brooker, founding partner, at Hong Kong marine marine insurance broker's Latitude Brokers.
Neil Roberts, manager of marine underwriting at the Lloyd's Market Association, said the South China Sea is not listed by the LMA's joint war committee which highlights insurance hotspots.
"Unless it is there would be no prospect of premiums rising," Roberts told Reuters. "The shallow waters and numerous reefs in the Spratly island region means that commercial shipping is unlikely to be sailing within the territorial waters of any of the islands."
(By Henning Gloystein and Keith Wallis)