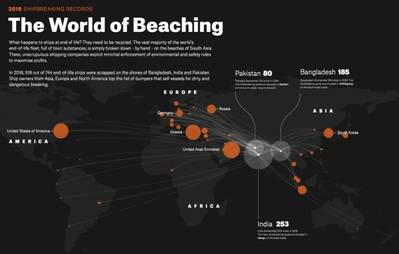 744 large ocean-going commercial vessels were sold to the scrap yards in 2018, out of which 518 were broken down on South Asia beaches, accounting for a record-breaking 90.4% of the gross tonnage dismantled globally.

According to new data released by the NGO Shipbreaking Platform,  at least 34 workers lost their lives when breaking apart the global fleet. The Platform documented at least 14 workers that died in Alang, making 2018 one of one of the worse years for Indian yards in terms of accident records in the last decade.

Another 20 workers died and 12 workers were severely injured in the Bangladeshi yards. In Pakistan, local sources confirmed 1 death and 27 injuries. Seven injuries were linked to yet another fire that broke out on-board a beached tanker.

"The figures of 2018 are shocking. No ship owner can claim to be unaware of the dire conditions at the beaching yards, still they massively continue to sell their vessels to the worst yards to get the highest price for their ships. The harm caused by beaching is real. Workers risk their lives, suffer from exposure to toxics, and coastal ecosystems are devastated. Ship owners have a responsibility to sell to recycling yards that invest in their workers and environment,"said Ingvild Jenssen - Executive Director and Founder - NGO Shipbreaking Platform.

With the oil and gas sector seeing a downturn in the last couple of years, the Platform has documented an increase in offshore units that have gone for scrap. Out of the 138 oil and gas units which have been identified as demolished in 2018 alone, 96 ended up on the beaches of South Asia.

"Clean and safe solutions are already available. Responsible ship owners, such as Dutch Boskalis, German Hapag Lloyd, and Scandinavian companies Wallenius-Wilhelmsen and Grieg, recycle their vessels off the beach. The EU maintains a list of clean and safe ship recycling facilities. More ships need to be diverted towards these sites," said Nicola Mulinaris - Communication and Policy Officer - NGO Shipbreaking Platform.