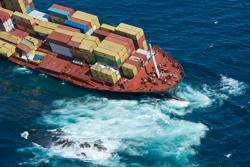 National On Scene Commander Rob Service said it was impossible to calculate exactly how much oil leaked during the recent heavy weather event, however, it was only a very small amount. While some of this oil appears to have reached the shoreline, it is unlikely to have a significant impact. The oil spill response team will closely monitor the situation over the weekend and remains ready to mount whatever response is necessary.