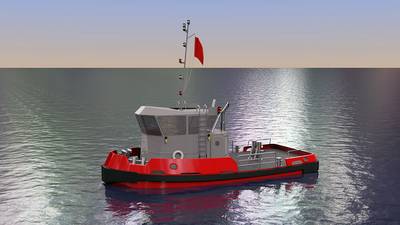 The Great Lakes Shipyard in Cleveland, Ohio, has been contracted by New York Power Authority (NYPA) to build and deliver two new tugboats for the Niagara Power Plant’s winter operations in Buffalo, N.Y. The new tugs will augment and replace aging vessels that are used for the installation, removal and maintenance of the Lake Erie-Niagara River Ice Boom and various associated marine construction projects.

The new tugs will be specially reinforced with heavy stems and shell reinforcement for operations in seasonal ice. The design of the conventional drive tugs includes elevated pilothouses for improved visibility when maneuvering, as well as a spacious work deck aft to facilitate ice boom connections. The tugs are designed to comply with proposed Subchapter M of Title 46 of the Code of Federal Regulations for inspected towing vessels.

Delivery of the first tug is scheduled for September 2015.

Like the barge, the naval architecture and marine engineering firm of Bristol Harbor Group, Inc., Bristol, RI, (BHGI) was contracted by NYPA to develop the contract design documents for the vessels and provide consultation during both the bid and construction phases. BHGI assisted NYPA during the bid process, and will be acting as NYPA’s on-site representative during the fabrication process, performing quality assurance and certification functions.

Great Lakes Shipyard is an affiliate of The Great Lakes Towing Company, which has a two-tugboat operation of its own in Buffalo. A familiar site on the Buffalo River and along Buffalo’s waterfront, the Towing Company has been providing harbor support services, including ship assist, ice breaking, and emergency rescue services, to the local shipping community for more than 115-years. In fact, when the Towing Company was organized in 1899, The Hand and Johnson Tug Line, based in Buffalo at the time, was its first acquisition and their fleet became the cornerstone of the Towing Company’s Lakes-wide service.

“We are very proud of this rich heritage and the Towing Company’s longstanding contributions to Buffalo's maritime community, and we are delighted to be awarded this contract by New York Power Authority to build beautiful new tugs for its ice boom operations,” said Joe Starck, president of the company.

NYPA is the nation’s largest state power organization, operating 16 power generation plants in various locations in New York State. Among those facilities are the Niagara Power Project’s Robert Moses Niagara Power Plant and the Lewiston Pump-Generating Plant. These plants utilize water diverted from the upper Niagara River to produce electrical power for NYPA customers. In a joint effort with the Ontario Power Generation utility, NYPA is responsible for installation and removal of an 8,800-foot-long floating ice boom designed to accelerate the formation of the natural ice arch that forms most winters near the head of the Niagara River and also stabilize the arch once it has formed. The ice boom reduces the severity and duration of ice runs into the Niagara River, thereby lessening the probability of large scale ice blocking in the river and ensuring continued hydropower generation. In addition, it reduces the probability of ice damage to docks and other shore structures.